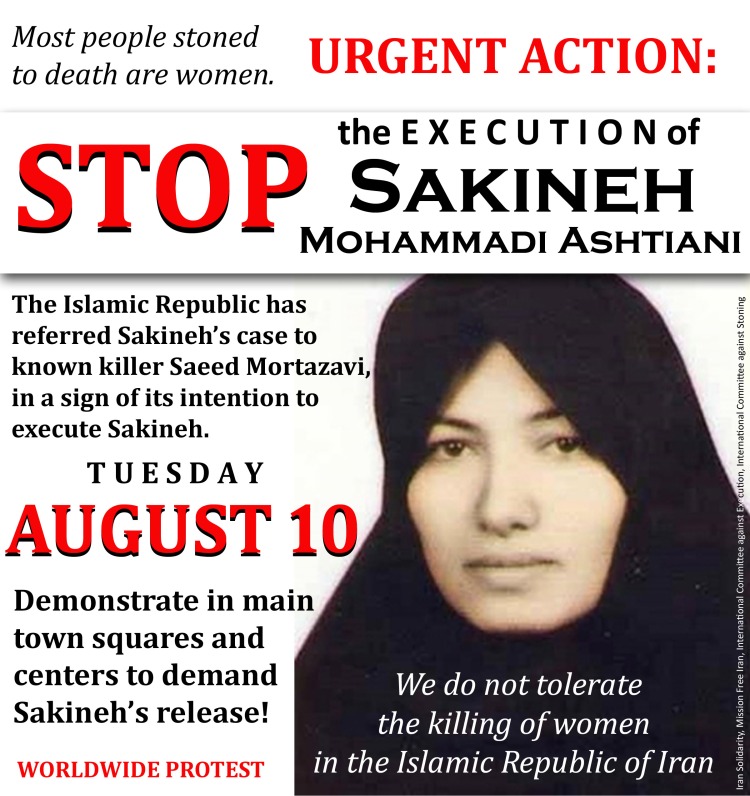 Callout to the Citizens of the World:

On Tuesday August 10
Come out into the Streets to Save Sakine’s Life!

In the face of immense international opposition, the Islamist regime in Iran was forced to retreat from stoning to death Sakine Mohammadi-Ashtiaani, a 42-year-old Iranian woman, for ‘adultery.’ But it now seeks to kill her by other means! It has rejected even the offer of its associate, President Lula Da Silva of Brazil, who had officially announced that his country would grant asylum to Sakineh and her family. What the regime did instead was to refer her case to Saeed Mortazavi, nicknamed ‘the torturer of Tehran,’ now the Deputy Prosecutor-General. He is a sociopathic torturer/murderer responsible for the killing of dozens of political prisoners such as Zahra Kazemi, an Iranian- Canadian photo journalist, murdered in 2003 while in his custody. In a report released in 2010 in Iran, Mortazavi was named as the man responsible for torturing dozens (including extensive rape), and the death of three of the political prisoners at Kahrizak detention centre in 2009. He was consequently discredited, but was rewarded for his loyalty and services to the regime through promotion to his present post!

By handing over Sakineh’s case to a cold-blooded killer regime is sending a message to the millions of people across the world who have risen up to save Sakineh. We take this declaration of war in earnest, and hereby call out to all honorable citizens of the world to come to Sakineh’s rescue by showing their opposition at their main town squares or centers on August 10th, demanding her immediate release.

We shall carry on this campaign until Sakineh is freed and stoning totally banned in Iran. Our next step is to mobilize for an International Day in 100 cities worldwide to protest against stoning and the barbaric Islamist regime in Iran. Further information on that action will be released through future announcements. The rally on August 10th is an urgent action aimed at stopping Sakine’s possible execution, as well as taking the first step towards organizing the 100-city day of protest.

The danger of Sakine’s execution is serious. Let us come to Sakine’s rescue on August 10th with one voice and one united battle cry: we shall not allow the killing of one more innocent human being by the murderous rulers of Iran!