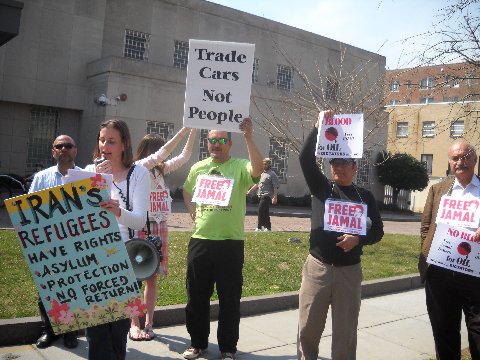 Spring in Iran starts at the same time as in Tokyo. Cherry trees are now in full bloom in both countries. Unfortunately, we are not here to talk about the common beauties of Japan and Iran. It is unfortunate that we must meet here in front of the Japanese Embassy to express our condemnation of the inhumanity of both governments ruling these two beautiful nations.

At a time when the Islamic regime is brutally repressing peaceful protesters, journalists, students, and human rights activists within its borders, it is appalling that we should find Japan supporting that very same regime’s efforts to silence protesters abroad.

Earlier this month, on March 4, Jamal Saberi, a refugee from his native Iran and a resident of Japan for 20 years, was arrested by the Japanese Immigration Bureau in Tokyo with the intention of deporting him to Iran. Although Saberi had applied for refugee status in Japan, it had never been granted.

Mr. Saberi is a known political opponent of the Islamic Republic of Iran. A long-time activist against the Islamic Republic, Mr. Saberi has a well-founded fear of persecution by the Islamic regime. The entire world can now understand why: we have all now seen, on video from cell phones streaming into our living rooms, the atrocities that the Islamic Republic inflicts upon even its youngest citizens. Neda was shot through the heart by the Islamic regime. Her “crime”? Walking among peaceful protesters last June. Mohammad Amin Valian, a 20-year old boy, has been labeled Mohareb and is now awaiting his execution. His “crime”? He cried for freedom in streets of Iran and threw a rock. These are only 2 examples of what the Islamic Regime has done to those who dare to question its brutal dictatorship; there are many, many more that we know, that Japan also knows.

So, is there really any question about what the Islamic Republic will do with Saberi, a man who has spent more than half of his life exposing and condemning the murderous and criminal nature of the Islamic Republic? No, unfortunately. There is no question at all. We know what will happen to Jamal if he is deported to Iran, and Japan knows it well too.

Japan’s attempt to forcibly return Saberi clearly constitutes a violation of key international principles, to which Japan is a signatory, that state that “no refugee should be returned in any manner whatsoever to any country where he or she would be at risk of persecution.”

So, let’s review: by initiating deportation procedures against Jamal Saberi, Japan is:
1) breaking the international agreements it has committed to
2) breaking its own laws
3) facilitating unlawful detention, torture, and probable execution

Now, wait a minute… I thought we were talking about Japan. That sounds an AWFUL lot like the Islamic Republic! Seems like these two countries share more than just bloom times for their cherry trees – indeed, they share something very ugly.

The Saberi case has obvious implications for Saberi and those who love him. But this case also has global implications: If Japan is allowed to violate human rights standards and international principles on the status of refugees, consequences for refugees worldwide will be dire. We consider especially the impact of Japan’s actions on thousands of new Iranian refugees surviving precariously in Turkey, which has in the past violated the principle of non-refoulement and has begun systematic though unofficial persecution of this newest wave of Iranian refugees.

Today, we are here to condemn the reprehensible actions of the Japanese government, and demand that Japan set the appropriate international precedent in this matter by freeing Jamal Saberi, stopping the deportation proceedings, at long last formally establishing Saberi’s refugee status, and implementing the appropriate protections to preserve his life.

We hold Prime Minister Hatoyama personally responsible for the fate of Jamal Saberi.

We are here to condemn the United Nations, which time after time has declined to step up and take action against this brutal regime. We demand that the UN step in and advocate on behalf of Saberi. It is long past time for the United Nations to take concrete action regarding the Islamic Republic and those that aid and abet its crimes, and we also hold Ban-Ki Moon personally responsible for the ultimate fate of Jamal Saberi.

We demand that the US government, and governments worldwide stand up and condemn loudly, as Switzerland has done, the actions of the Islamic Republic as it attempts to recruit international legal assistance to silence Iranian dissidents living abroad. Our governments must also loudly condemn Japan’s willingness to assist the Islamic regime in its bloody crimes.

Finally, we ask our fellow citizens to do their civic duty: people of Japan, we call on you to make the right demands of your government. All humanitarian people need to show their concern by writing to the Japanese government and to the UN. The problem before us goes far beyond the case of one man. There are implications for all of us.

Japan must uphold refugee rights for Saberi and all others like him, according to international standards, and we extend this demand throughout the world wherever refugee rights are threatened.