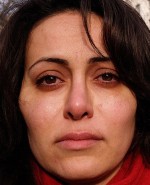 MAY 5 protest CANCELLED, along with Bita’s deportation.

Bita Ghaedi is a young woman whose life in Iran was bound, tortured, and scarred by the pervasive gender-based violence she experienced. Her political activities with PMOI/MEK/MKO mark her as an opponent of the regime, and also one who will face certain execution upon return to Iran.

She has sought refuge in the UK with her partner. She has viable grounds for establishing refugee status: she has numerous reasons to fear for her life if she is returned, and it is illegal under UN agreements on the Status of Refugees to violate the principle of non-refoulement, or returning an asylum-seeker to a country where they have grounds to fear persecution. England is a signatory to the legally-binding agreements on Status of Refugees, and Bita’s case is very clear cut. Nevertheless, David Miliband’s government declared that she would be deported back to Iran.

Her ticket was booked for April 20, 2010, and it was only through natural disturbance in the form of volcanic ash from Iceland that Bita’s deportation was temporarily halted.

We must continue to advocate for Ms. Ghaedi to ensure that her human rights, and our human rights, are not breached by the reprehensible actions of the self-serving British government.