March 21, 2010: Report on Protest at Japanese Embassy in Washington DC in support of Jamal Saberi

FARSI: Coverage of March 21 protest for Saberi (Jalal Amanzadeh Nouei) in front of the Japanese Embassy

First, I would like to note that in the lead-up to this very important event, there was a great deal of support from the Twitter and Facebook communities. Blogger analysts Scott Lucas at Enduring America and Josh Shahryar of Daily Nite Owl and the Huffington Post covered the Saberi issue in their sites. The Global Freedom Movement put together a fantastic Virtual Protest for Jamal Saberi so that those who couldn’t make it to Washington DC to join us could “be there” in spirit. We’d like to extend our heartfelt thanks everyone who tweeted, shared, blogged, and georeferenced their support for Jamal Saberi and all of the refugees and asylum seekers that he represents.

Today, March 21st, was the first day of really beautiful spring weather in Washington DC. Everyone was outside enjoying the weather. It was a perfect day for a demonstration. I found a parking spot on the street just around the corner from the Japanese Embassy at 2520 Massachusetts Ave NW, unloaded my signs, and walked over to where the police were already stationed to introduce myself. Some of our friends were already there, ready to get the protest started.

After speaking with the police officers, I noticed another one of our friends drive past the embassy and pull up to the curb a short distance away. A couple of us ran to catch up with him – he had brought a megaphone and a number of signs with relevant slogans:

There was one large red banner reading “Down with the Islamic Republic of Iran!” There were also numerous large and small signs with the Free Jamal! logo that bears Jamal’s smiling face.

(Mental note for future protests: we need more signs implicating Japan in refugee rights violations vis-à-vis Iranian asylum-seekers. Otherwise, if people didn’t realize that we were standing in front of the Japanese Embassy, they might not understand what we were protesting about. Not enough people know who Jamal is. Line from cops today as they were writing down the details of the protest: “OOOOK, it’s a protest for a political prisoner… who are we freeing today?” Hey, maybe folks in the area don’t know Jamal’s name now, but we will fix that.)

Although the protest was scheduled to begin at 1pm, we started displaying our signs a bit early so as to take advantage of the opportunity to spread our message. What I liked about the location in front of the Japanese Embassy was that the drivers in the neighborhood did not drive by quickly. Rather, most people driving by were curious to actually read the signs we were holding – they wanted to know what was going on. On a few occasions, traffic actually slowed to a crawl so that drivers and their passengers could read our signs. How fabulous!

We stood lined up with our signs along the front of the property for a few minutes more while waiting for stragglers to arrive. We then started the chants. Because our usual chanter wasn’t in attendance, it fell to me to lead the shouting. This wasn’t exactly easy since we had to make up all new chants for the day’s protest, so no one was familiar with them. Some of the chants we used were as follows:

No blood for oil!

Hatoyama and Obama
Must do what’s right:
Stand up for human rights!

Stop aiding dictators!
Blood is on your hands!

Justice for Immigrants!
Freedom for Refugees!

Together we stand, together we fight! We demand human rights!

The megaphone I was using was great. People could hear me all the way down the street. My sense is that Embassy Row is generally a fairly quiet neighborhood. I felt like I was somehow shattering the silence by being so loud, but that’s the point, isn’t it. Also, there were so many people outside in the streets today, not just driving by in cars but walking their dogs, jogging, walking – our audience was much larger than it often had been over the winter months when people are bundled up in their homes trying to stay warm. People were out today, and they were definitely curious to know what we were there for.

After we finished the chants, I read our opening statement. Following that, Hassan Massali spoke (summary of his statement). Next was Joanne Michele, a human rights activist and member of MFI (her statement is here). Finally, Saeed Salehinia of WPI spoke (summary of his statement); he also brought the flag of the Islamic Republic and a photo of Khamenei to burn in protest. After having some difficulty with the matches in the wind, the symbols of this regime that has been responsible for so much death, darkness and misery went up in flames in front of the Embassy.

I read the following closing statement very loudly through the megaphone, so that the gentleman from the Japanese Embassy who was watching us from across the street could hear every last word:

Our friends in Toronto went to visit the Japanese Consulate there a few days ago. The staff at the Consulate actually encouraged our friends not to pursue their efforts on behalf of Saberi. They told my friend Mehran, they said, “Hey, don’t waste your efforts, there probably won’t be a response from Japan on the Saberi case.”

But as Mehran told them then, and as I say right now, “no response” is in fact a response to our demands, and WE – as an international movement that demands freedom and asylum for Jamal Saberi and all those he represents – WE HAVE AN ANSWER FOR THAT.

We will keep shouting, we will keep coming back to this place to be that thorn in their side, we will continue to expose the darkness of the Japanese government to the light of international public opinion. We will not stop calling, writing, faxing – WE WILL NOT LEAVE JAPAN’S DOORSTEP until Jamal Saberi is free.

After the closing statement, Salehinia brought out some letters and envelopes. The letters were appeals to free Saberi and grant him refugee status and protections. We each signed the letters, then went to drop them in the Embassy’s letterbox. 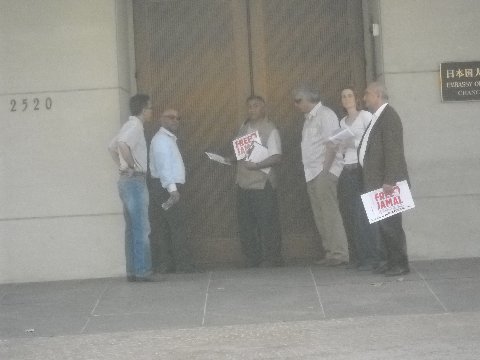 Salehinia noted to the security guard on duty that he had been given permission to drop the materials in the nightbox, but the hired help from Wackenhut (who, by the way, made aggressive and xenophobic comments during our event) was uncomfortable with this and asked that we leave the front step of the Embassy. In addition to the letters, I also placed in an envelope our press release, the event flier, and a dozen pages worth of tweets in support of Saberi from various twitterers that I had printed out. (I thought the twitterati would like a chance to be heard. :)) We placed our letters in the box, and departed Japanese territory.

Just as we were cleaning up, some more friends arrived on the scene and helped to carry the signs and other supplies back to my car. They were very proud of our efforts, and felt good about Saberi’s chances. They said, “You never know – just what you did here today – if it reaches the right person’s ears, that could be what makes the difference for Saberi’s freedom.”

7 thoughts on “March 21, 2010: Report on Protest at Japanese Embassy in Washington DC in support of Jamal Saberi”