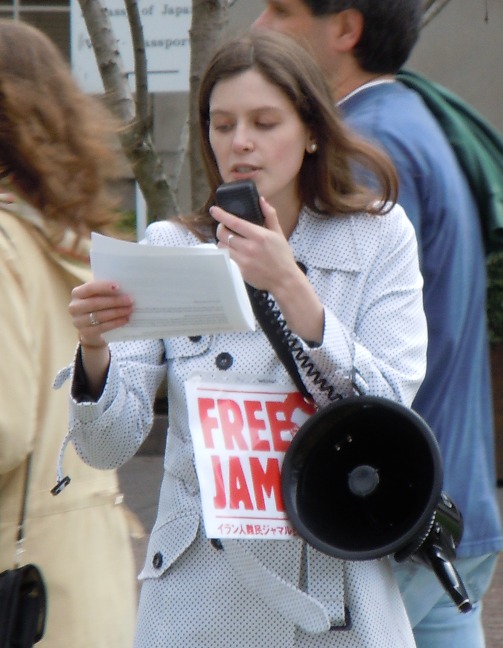 People have descended upon Washington, D.C. today to admire a gift from Japan to the United States. To express my gratitude, I think of John Winthrop’s immortal words, spoken upon his first sight of Massachusetts Bay: “…for we must consider that we shall be as a city upon a hill. The eyes of all people are upon us,” and I say to Japan: “Hello! We’re back!”

We are here to remind you that every single day, our eyes are upon you.

Japan is now denying knowledge of the man called Jamal Saberi. Of Jalal Amanzadeh Nouei then? The birth name of Jamal Saberi, who was arrested on March 4, and is subject to deportation to the Islamic Republic of Iran, where he faces certain violence and likely death?

Although Japan has made a commitment to human rights as a signatory of the UN Convention Against Torture, it is willing to deport Mr. Saberi, who has committed no crime, to Iran. Article 3 of the Convention Against Torture explicitly prohibits extradition to a country where there are “substantial grounds for believing that he would be in danger of being subjected to torture.”

Japan’s gift to the Iranian regime is one that it has no right to give. It is the gift of Mr. Saberi’s life.

To the United Nations High Commissioner for Refugees:To this entity that claims to stand for human rights:
Are you aware of your duties?
The UNHCR’s only responsibility is to advocate, protect, and assist those in danger. In its own words, the agency believes that its duty is to “transform policies and services on national, regional or global levels to better protect people.”

The only transformation we see here is from an organization of protection and advocacy to one of neglect and ineptitude.

Are you aware of Jamal Saberi?
Jamal Saberi’s case has global implications. Over 4,000 Iranian refugees are in dire conditions in Turkey, where they face a stagnated process of resettlement and violence at the hands of a corrupt government.

On Tuesday, Turkish Interior Minister Besir Atalay announced that Turkey will be building detention centers in six cities. Regime agents already cross the border to intimidate and brutalize the thousands of Iranian refugees who have fled post-election atrocities in Iran. The detention centers are yet another gift to the regime; they will save IRGC travel time.

Vague speeches about human rights are not enough. The United Nations, the United States, and the world have an obligation to help Jamal Saberi and the thousands in dire conditions.

For this to happen, the UNHCR must first review Mr. Saberi’s case and rightfully recognize his refugee status.

Per the UN’s own requirements, Mr. Saberi is a Priority One case, which applies to, “persons facing compelling security concerns in countries of first asylum; persons in need of legal protection because of the danger of refoulement; …persons who have experienced recent persecution because of their political, religious, or human rights activities (prisoners of conscience); … and persons for whom other durable solutions are not feasible and whose status in the place of asylum does not present a satisfactory long-term solution.”

The Convention Relating to the Status of Refugees also designates a refugee as a person who has a “well-founded fear of being persecuted [or]…as a result of such events is unable or, owing to such fear, unwilling to return [to their home country].”

Would Jamal Saberi willingly remain in Japan, with its history of mistreating refugees? Yes. This is the home that he’s chosen, but Japan has invalidated that. Would thousands flee Iran for Turkey, where open borders allow IRGC the opportunity to harass, intimidate, and violate them? These refugees have no money, are not allowed to work, are cut off from their families, friends, and their homes. With almost 11,500 refugee applicants still in Iran, there is no excuse for the UNHCR to ignore the impact of Mr. Saberi’s significant case.

This is not a case of the United States needing to rescue helpless refugees from coincidentally-oil-rich countries. The truth is that this country has provided safe haven to millions; we were all refugees from oppression, poverty, or just came to seek a better life. It is not our duty as a government, but our responsibility as beneficiaries of refuge.

To Japan, Turkey, and nations that are willing to flagrantly violate international law and human decency for the sake of false security and deals with dictators, this is my gift to you: the world’s eyes are on you.

I will see you next Sunday.