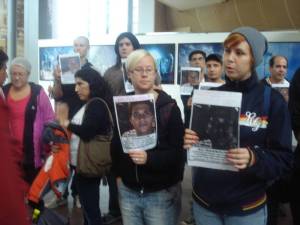 Report from Friday 26 August 2011: Ali Mansouri was on the plane this morning in Stockholm Sweden. The flight was about to take off to deport this young man to hell in Iran. But these beautiful people would not give up on Ali. The humane front would not let him be sent back to the bloody hands of the Islamic regime. The activists on the ground decided to pool their money & bought a ticket to Tehran.

Matthias from Justice Party in Sweden got on the plane. Matthias managed to arrange for a feed from Swedish national television to film what was happening on the plane. The activists on ground managed to stop deportation of Ali Mansouri. When I was talking to Ahmad Fatemi you could hear celebration on TV. LONG LIVE ANDISHE, MATTHIAS, EBI & EVERYONE THERE WHO REPRESENTED THE HUMANE FRONT FOR ALL OF US!!!

We thank each and every one of you who supported Ali Mansouri.

Here is the report from the Justice Party

« Glorious Demonstration in Support of Asylum-seekers’ Rights: Activists in Sweden Protest Deportations of Ali Mansouri and Mitra Kahrom
Mitra Kahrom: Because She is a Woman. | URGENT: Stop the Illegal Deportation of Mitra Kahrom to the Misogynist Islamic Republic of Iran. »