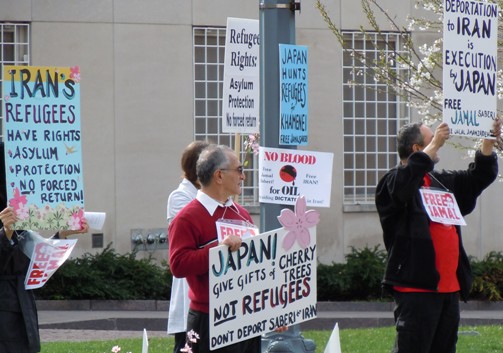 So, the news is that our friends at the Free Jamal campaign have found out that part of the reason that Japan gives for refusing Jamal’s application for asylum is that they say that Jamal’s political activities in Japan are not ‘important’ enough for the Islamic Republic to do anything against him, and that the party to which he belongs, WPI, is not really big or important in Iran.

I repeat: This Islamic regime is going to EXECUTE a 20-year old boy because on ONE day he said, in a crowd on the street, “Down with the Islamic Republic,” and he threw a stone.

And Japan is trying to tell people that TWENTY YEARS of publicly exposing and indicting the crimes of this regime of 150,000 executions is going to draw Jalal Amanzadeh Nouei anything less than that?

SHAME ON YOU, JAPAN.

Jamal’s activities and party are not “important” enough to draw the most severe response from this regime?

How does Japan define “importance”? Do people have to throw a certain number of stones or chant “Down with the Islamic Republic” a certain number of times? What are those numbers, precisely? Those 150,000 executed then? How many times had they said, “Down with the regime”? Does Japan claim that the judiciary system in Iran abides by national and international rules and thus is a reliable regime? What is Japan’s take on the recent executions post-election, both those formally conducted in the regime’s prisons as well as those conducted de facto on the streets? What about those thousands imprisoned since the June elections? Do THEY belong to an important organization? Or are they just citizens of a brutally repressed nation who cannot suppress themselves, cannot keep quiet any longer against the heinous crimes of this regime?

Hatoyama! By denying the realities of life and death in the Islamic Republic, you perpetrate this regime’s slaughter of innocents all over again, and the blood on Khamenei’s hands is transferred to your own.

The people will not be lured. NO one can claim to be sane and believe Japan’s “justification” for contributing to the torture and execution of Jamal Saberi.

We standing here all know very well what is facing Jamal if he is returned to the Islamic Republic. And Japan knows it too. But maybe Japan needs a reminder. So we shall give them that reminder in the words of the victims of this bloody regime.

Unfortunately, the 150,000 slaughtered by this regime cannot speak to their experiences any longer, and apparently statistics, such as the number of people buried in the regime’s hidden mass burial ground of Khavaran, have not moved the Japanese government. So we will share the recent experiences of a young man, 35 years old, named Saeed Malekpour.

Saeed Malekpour was arrested in October 2008 upon returning to Iran, and detained at the notorious Evin prison. He had been working as a website designer in Canada since 2005.

“My name is Saeed Malekpour. I was arrested on October 4th, 2008, near Vanak Square (in northern Tehran) by plainclothes agents who did not present an arrest warrant or identification. The arrest resembled an abduction. Afterwards, I was handcuffed, blindfolded and placed at the back of a Sedan. A heavy-set agent leaned his weight on me by positioning his elbow on my neck, and forcing my head down throughout the ride. They transferred me to an undisclosed location which they called the “technical office.” When we arrived, a few agents physically beat me severely and verbally abused me, while I remained handcuffed and blindfolded. They forced me to sign a few forms, but I was not able to read the contents. As a result of the physical assault, my neck was aching for several days and my face was swollen from the punches, slaps, and kicks I received. That night, I was transferred to ward 2-A of Evin prison. I was placed in a solitary cell [6’x6’]. I was only allowed to leave the cell twice a day at specified times for a break of fresh air. However, during the times I left the cell, I was blindfolded. The only time I was allowed to remove the blindfold was in my cell.”

>> When he speaks of his tortures, he describes them like this:

“Most of the time the tortures were performed by a group. While I remained blindfolded and handcuffed, several individuals armed with cables, batons, and their fists struck and punched me. At times, they would flog my head and neck. Such mistreatment was aimed at forcing me to write what the interrogators were dictating, and to compel me to play a role in front of the camera based on their scenarios. Sometimes, they used extremely painful electrical shock that would paralyze me temporarily. Once in October 2008, the interrogators stripped me while I was blindfolded and threatened to rape me with a bottle of water.

One of those days, as a result of being kicked, punched, and lashed with cables on my head and face, my face became very swollen. I lost consciousness several times, but each time they would wake me up by splashing water on my face and continue with the torture. That night, they returned me to my cell. At the end of the night, I realized my ear was bleeding. I banged on the door of my cell, but nobody came. The next day, while half of my body was paralyzed, and I was unable to move, they took me to Evin prison’s clinic.

>> Saeed eventually was taken to the hospital, but he received no care and was returned to Evin prison. For 20 days, the left side of his body was paralyzed. Later:

On January 24, 2009, after being subject to severe beatings, one of the interrogators threatened to pull out my teeth with a pair of tongs. One of my teeth broke and my jaw was displaced after I was kicked in the face by him. However, the physical tortures were nothing compared to the psychological torments. I endured long solitary confinement time (totaling to more than one year) without phone calls or the possibility of visiting my loved ones, constant threats to arrest and torture my wife and family if I did not cooperate, threats to kill me. They also provided me with false news of arresting my wife. My mental health was severely threatened. I had no access to any books or journals in the solitary cells, and at times, I would not speak to anybody for days.

Kicked, punched, and lashed with cables on his head and face, til the point of losing consciousness, only to be awakened with cold water splashed on his face, to endure the tortures again!

THIS AND WORSE is what will happen if Japan sends Jamal Saberi back to Iran, and the responsibility for that belongs to JAPAN.

Farshad Hosseini at the Free Jamal Campaign is leaving tonight for Japan, and he is seeking an appointment with UN Special Rapporteur Jorge Bustamente, who will be in Japan on mission to observe the human rights situation of migrants in the country on March 31st. The Free Jamal Campaign has called for a Global Day of Action against the anti-refugee policies of the Japanese government on Wednesday March 31st. We hope that our community will be back out here in front of the Japanese Embassy on Wednesday to join voices worldwide in condemning Japan’s illegal anti-refugee policies.

We will keep shouting, we will keep coming back to this place to be that thorn in your side, Japan; we will continue to expose the darkness of the Japanese government to the light of international public opinion. We will not stop calling, writing, faxing – WE WILL NOT LEAVE JAPAN’S DOORSTEP until Jamal Saberi is free.