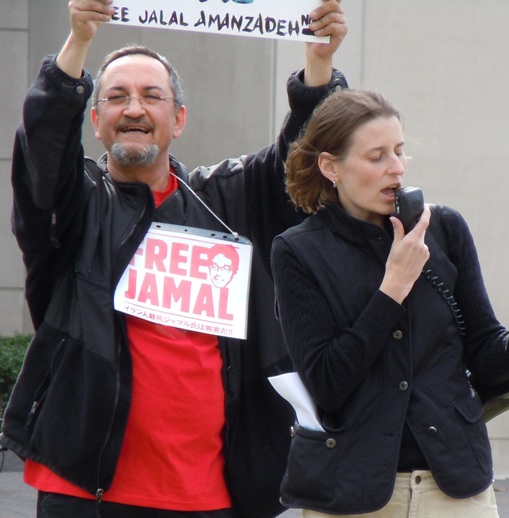 We discussed last week, and Joanne Michele just now so inspirationally discussed, the case of Jalal Amanzadeh Nouei, also called Jamal Saberi. We are now all familiar with his case and what is at stake here. As we continue to advocate for Jalal, I think it is important that we recognize the broader context and implications of Saberi’s case – what it tells us about the state of the world that we live in and our rights, collectively, and what it tells us about the agenda of the Islamic Republic.

We talked last time about the fact that whatever Japan does in the Saberi case has undeniable ramifications for each and every one of the thousands of Iranian refugees who are waiting in Turkey for asylum. And by extension, the precedent set by Japan has implications for all asylum-seeking refugees worldwide. Looking at it this way, we see that the Saberi case is about the man, Jalal Amanzadeh Nouei, but it is also about all people who have ever and will ever seek refuge in another land from an oppressive government. I expect this to resonate with all Americans; indeed, it is the story of our nation.

What I want to talk about today is another way in which we should see Jamal Saberi not just as a singular case of one man facing the injustice of Japan’s government, but as representative of something much larger. And that something larger is the Islamic Republic’s increasing efforts to not only silence its opposition inside Iran, but to reach out beyond its borders to silence its most vocal critics abroad.

Back in December, ten Kurdish activists living in Sweden, and two living elsewhere, were added to INTERPOL’s red notice list at the behest of the Islamic Regime. Then Shahram Homayoun, a television producer living in California, was added to INTERPOL’s list by the regime. Then Saberi was arrested and prepared for deportation (coincidentally within 2 weeks of Larijani’s visit to Japan). A week later, the photo of our own Ahmad Batebi, a well-known Iranian human rights activist, appeared on Iran’s Press TV, with the announcement that he and another human rights activist living in the US would also have their names added to INTERPOL’s red notice list by the Islamic Regime.

So we see once again that Saberi is not just a lone and unfortunate target of unfair Japanese anti-immigration policies here. Rather, he is representative of a larger target that the Islamic Republic is aiming at: the Islamic Republic is reaching outside its borders into the free world to silence voices of dissent worldwide – AND they are using our tools – INTERPOL, our nations’ justice systems – to carry out their bloody agenda.

WE DO NOT ACCEPT THIS. We demand that our governments force the Islamic Republic to withdraw its reach by explicitly refusing to recognize the Islamic Republic’s legitimacy to use international legal tools like INTERPOL, and we demand that governments refuse to cooperate with this illegitimate regime’s efforts to silence the voice of those who demand human rights for people in Iran, and for all of humanity.

Switzerland has already taken its position, and Switzerland has chosen to stand on the side of the people, unequivocally refusing to cooperate in legal matters with the illegitimate Islamic Republic.

Japan! We want to know: where do you stand? Do you stand with the people, or with the bloody executioners of the Islamic Republic?

2 thoughts on “March 28, 2010: Maria Rohaly: Jamal symbolizes struggle FOR human rights and AGAINST repression by dictators”