Acting Out against Execution in Iran: Street Theater in Washington DC for World Human Rights Day 2013

In recognition of World Human Rights Day, activists in Washington DC gathered on 15 December 2013 in Lafayette Park for a street theater performance against execution in Iran. The action was coordinated by Mission Free Iran and Unity for Democracy and Justice in Iran, with many other activists contributing their energies.  We thank everyone who came out to support this fantastic action calling for human rights in Iran, an end to executions, release of all political prisoners, and the downfall of the Islamic regime in Iran.

The script of the performance appears below the embedded video.

Greetings, friends here in Washington DC. We are here with you today in honor of World Human Rights Day.

The UN General Assembly proclaimed 10 December as Human Rights Day in 1950, to bring to the attention ‘of the peoples of the world’ the Universal Declaration of Human Rights as the common standard of achievement for all peoples and all nations.

Yet, after 63 years, we, the people of this world, can look around the globe and see little evidence that our human rights are recognized.  We see the worst violations of the human rights of our sisters and brothers all over the world, including in Iran.

We’re here today to share with you the story of what is happening in Iran today, and ask for your support in demanding human rights for Iranian people, and in raising your voice for all people suffering from lack of human rights around the world.

Iran is a place where violation of peoples’ human rights has been a constant for generations, despite the fact that Iranian people have never stopped fighting for freedom, equality and human rights.  Since the time Islamists countered the Iranian peoples’ revolution in 1979, terror, torture, rape and execution have been daily occurrences in Iran.  They are the only tools this regime has to maintain its grip on power.

[BEHIND THE GALLOWS ARE PICTURES OF PEOPLE SENTENCED TO EXECUTION]

And so while governments have been talking about Iran’s hypothetical nuclear capabilities – talks that were ironically held in Geneva, the birthplace of the Universal Declaration of Human Rights – more than 90 people were executed by the Islamic regime in Iran.  And those governments said nothing about these crimes against humanity, ignoring the killings as they have ignored three years’ worth of reports from the UN’s own Human Rights Rapporteur to Iran.

In fact, there is nothing hypothetical about Iran’s execution capabilities, which it has used to kill tens of thousands of Iranian people over the past 34 years.

Already this year, the number of people executed in Iran under the new “president,” Rouhani, has exceeded last year’s total.  Thus far in the year 2013, at least 538 people have been executed by this regime, and more have been killed in custody: through torture, or through the regime’s intentional withholding of critical medical care for sick prisoners.

NARRATOR (serving as government official at the execution):

“MAJID KAVOUSIFAR IS TO BE EXECUTED FOR THE CRIME OF MOHAREBEH – WAR AGAINST GOD!”

[ONLOOKERS WEEP AND LOOK MOURNFUL; ONLOOKERS SLOWLY RAISE SIGNS IN ENGLISH & FARSI THAT SAY “NO MORE KILLING IN IRAN,” “STOP THE EXECUTIONS IN IRAN,” “NOT ONE MORE EXECUTION IN IRAN,” “DOWN WITH THE ISLAMIC REGIME IN IRAN,” ETC.]

[EXECUTION STARTS TO BE IMPLEMENTED]

Silence is death.  When people around the world stay silent while the regime executes us, the killings continue on a near-daily basis.

[SOMEONE FROM THE CROWD SHOUTS OUT, THEN OTHERS SHOUT TOO]

“Stop this execution! No more killing!”

[PEOPLE RUSH TOWARD THE GALLOWS AND PUSH THE EXECUTIONER AWAY]

[PEOPLE REMOVE THE NOOSE FROM THE EXECUTED PERSON]

NARRATOR [WHILE PEOPLE ARE FREEING THE CONDEMNED]:

And this is what Iranian people have done to try to stop executions in Iran.  But they need your support too.

On Word Human Rights Day, we ask honorable people around the world to stand with us to demand human rights in Iran, and worldwide.

ZANYAR MORADI – My name is Zanyar Moradi. Currently, I am sitting in a death row prison cell in Karaj, Iran. It is hard to be twenty-one and have to face my death, to live everyday with the nightmare of death, to shiver every time I hear their footsteps coming. It has been three years since my cousin Loghman and I have been imprisoned. We were tortured for nine months. They would beat us so hard that we could not walk; two of my vertebrae were fractured. And now we are waiting for the hanging rope of death. They tell us now plans are being set for our execution, and I can’t sleep at nights. Whatever you can do, please don’t let them execute us. Please let this regime know that we are not alone. Please voice your protest to this verdict. If you protest, if you complain to them, we will hear it!

ZEINAB JALALIAN – I am the voice of Zeinab Jalalian.  I am from Maku, a city in the far northwest corner of Iran, in the province of West Azerbaijan. I was accused of ‘waging war against God’ and belonging to an illegal political organization; as a result, I have been detained in Dizel Abad Prison under severe torture since May 2008.  Although my execution sentence has officially been lifted, the abuse that I receive in prison may result in my death: due to head injuries received while being interrogated, I have recently lost my vision. My health is precarious and I need to see a doctor, but the authorities refuse to allow me to have the medical care I desperately need. Political prisoners must be free!

HAMED AHMADI – I am the voice of Hamed Ahmadi.  I am a Sunni Muslim facing execution in Iran because of my religious beliefs. I have been in jail since June of 2009, and have never held my daughter, who was born soon after my arrest.  She is four years old now.  In Ghezel Hesar Prison, I have been brutally tortured, and I have been sentenced to die.  In protest of my execution sentence, I have been on hunger strike for more than 30 days.  My health condition is now critical, both from the hunger strike and from the beatings I’ve had to endure from the prison guards.  I am bleeding internally.  Be my voice and call for the freedom of political prisoners in Iran.

HADI RASHIDI – I am the voice of Hadi Rashidi.  I am chemistry teacher, as well as a cultural activist who advocates for the rights of Iran’s persecuted Ahwazi Arab minority. I was arrested in 2011 for my cultural work. I was hospitalized soon thereafter as a result of severe torture, and remain in poor health.  I have been sentenced to execution; just last week I was removed from Karoun Prison to an unknown location.  My loved ones fear that I will be executed very soon.  Demand an end to the barbarity of execution!

HABIB LATIFI – I am the voice of Habib Latifi.  Before I became a political prisoner in Sanandaj Prison, I was an “A” student in industrial engineering. I love nature, topography, and mountain climbing, and I want nothing more than my human right to freedom. I have spent the past six years under torture at the hands of the Islamic Republic.  I have languished for months in solitary confinement, and endured grievous brutality, once nearly dying from being kicked and beaten with batons by half a dozen prison guards.  My family fears that I will be executed soon.  Say no to execution. Free all political prisoners!

HABIB AFSHARI – I am the voice of Habib Afshari.  My brother Ali and I have been sentenced to execution on charges of “moharebeh,” a political charge that means “enmity with God.”  Our two other brothers are also being held as political prisoners.  Our mother died of a heart attack she suffered following the announcement of the regime’s sentences against us.  We have been imprisoned for three years now. My brother Ali is in poor physical condition as a result of bullet wounds he sustained during his arrest by the regime. He was finally transferred to an Orumiyeh Hospital last week due to severe intestinal bleeding, and was returned to Orumiyeh Prison immediately after his surgery.  All political prisoners must be free!

MOHSEN DANESHPOUR – I am the voice of Mohsen Daneshpour.  My my wife, my son Ahmad and I were all arrested after the 2009 protests in Iran – protests that made the world realize what was really happening to people inside Iran. My son Ahmad and I were found guilty of moharebeh – “enmity against God” – and sentenced to execution because we were accused of belonging to an illegal political organization.  Ahmad, who is a political prisoner in ward 350 of Evin Prison, has lost almost 50 pounds, and is in critical health condition, but the regime will not allow him to have the medical care he needs.  I ask you to raise your voice with ours, and demand the release of all political prisoners in Iran. Not one more execution!

“We ask you to take action to stop the execution of these and many others at risk of imminent execution in Iran.” 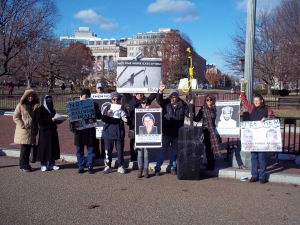 « Reza Shahabi and Behnam Ebrahimzadeh Write from Evin Prison: Stop the Executions and Release the Political Prisoners Immediately
Imprisoned labor activists call on workers across the country to join in solidarity in protest against poverty wages: Minimum wage must be no less than 2 million Touman per month »