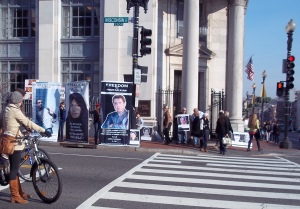 On 2 December 2012, Mission Free Iran together with Unity for Democracy and Justice in Iran implemented awareness-raising and protest actions in Washington DC against execution and political imprisonment in Iran as part of a unified international protest action (link) to demand an end to execution in Iran and worldwide.

We began at 1pm at the corner of M St and Wisconsin Avenue in Georgetown, displaying banners with images of a number of people recently killed by the regime in Iran, including blogger and facebook user Sattar Beheshti and laborer and activist Jamil Sowaidi, as well as several banners and posters of political prisoners and victims of human rights abuses still surviving in the dank prisons and bloody torture houses of the Islamic regime, including Houtan Kian, Nasrin Sotoudeh, Sakineh Ashtiani, Zeinab Jalalian, and Hanieh Shotorban, among many others. We talked to passers-by about the concomitant economic and human rights crisis ongoing in Iran, and handed out flyers that show people how to take action in support of human rights in Iran.

Many people walking by took explicit notice of Nasrin Sotoudeh’s image, indicating that the American public recognizes her and is aware of her situation. The banner showing Majid Kavousifar waving goodbye to his loved ones with a smile immediately prior to his execution transfixed peoples’ gazes. We told the stories of Sattar Beheshti and Jamil Sowaidi before reading a short statement about why we were out demonstrating.

We then moved our demonstration to the offices of the Islamic regime, further north on Wisconsin Avenue. Our demonstration there also garnered a great deal of interest from people in passing cars, several of whom tapped their horns enthusiastically in support of our action condemning the regime.

The statement that we read at the action appears below the clip and photos.

Mission Free Iran thanks everyone who joined yesterday’s action in support of political prisoners in Iran, and in fervent opposition to execution. 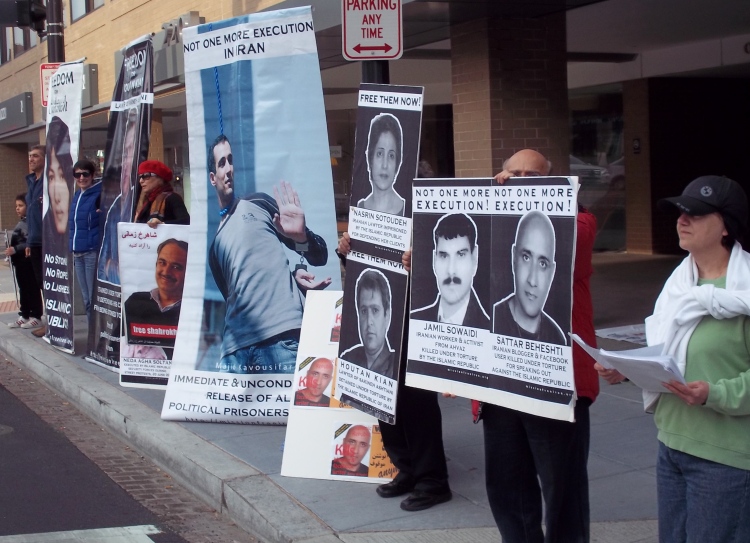 Statement, 2 December 2012: Not One More Execution in Iran!
For almost 34 years, the Islamic Republic of Iran has depended on the use of open and barbaric violence against the people in Iran as its only response to peoples’ social and political questions.

Although the regime’s recent escalations of violence and mass executions lie within the framework of Islamic ideology and the “legal” identity of the regime, they also constitute the regime’s tactical response to a different situation: the Islamic regime’s economic system has crashed. As a result of decades of plundering and theft of the nation’s wealth, and deeply corrupt banking and management systems, underpinned by 34 years of economic and political “governance” by bandits and mafia gangs, the inhuman Western-led economic sanctions have now literally driven the entire working class, in all sectors of production and services – teachers, nurses, the retired, the unemployed: the entire society, the Iranian 99% – to the brink of annihilation.

The Islamic regime’s escalation of the most savage punishments, inflicted upon all from the political opposition to poor and desperate Afghan refugees, through the use of mass executions and public amputations of body parts, are happening while people are literally starving.

This regime has left no other way for people to defend their right to existence but protests and demonstrations and strikes, which are happening every day, all over Iran. People demand bread and the right to live, and the regime is only capable of giving death.

These executions must stop and today we, the people, are in our best position to stop this barbarity: to demand a stop to all executions immediately!

We can do this today. We can press the regime to open the gates to all prisons, to release all political prisoners. We can force the regime to retreat and we can call this our first step towards bringing an end to the reign of a gang of rapists, cut-throats, pickpockets, and executioners in Iran.

Down with Islamic Republic of Iran!
Free All Political Prisoners in Iran!
Not One More Execution!

« Not One More Execution in Iran! Join Us in Washington DC on 2 December to Protest against the Islamic Regime
Worker Activists in Boukan, Iran Remain Detained »