Mission Free Iran wishes our American brothers and sisters at Walmart a good fight on “Black Friday” and a quick victory. 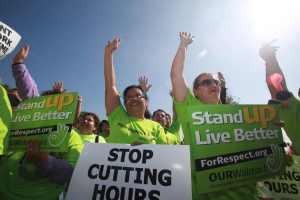 Once before, someone had asked why Mission Free Iran covers events from other countries, and recently someone claiming to be this-and-that even criticized us for covering events from the occupied Gaza, saying these issues  “are not related to Iran”and we should concentrate “our efforts against the Islamic regime”! Our response was: The oppressed of Gaza, the marginalized in Israel, the Greek unemployed and in this case, the American workers are despite all shortcomings our natural allies and their progress against their oppressor, in this case, and specially in this case due to the political and economical role which the American capitalism plays,  positively affects not only Iran but the entire world. We have no doubt that the US government, despite all differences with the Islamic regime or any other dictatorship across the world,is  a natural ally of the dictators against revolutionary movements. We have no doubt that the most “liberal” president of the US will not hesitate a second to stand behind any dictator in Iran-including the Islamic regime of barbarians- against a social revolution in Iran. So:

Long live brotherhood & sisterhood of American and Iranian proletariat
We wish our American brothers and sisters at Walmart a good fight on “Black Friday” and a quick victory.