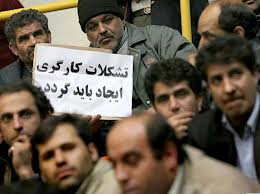 HRANA reports that the workers at Derek Dam have not been paid their wages in the past seven months, while the employer continuously increases pressure on the worker. HRANA writes that while wages are necessary for the survival of the workers the dam employer is either incapable of paying wages or chooses not to pay.

According to HRANA, these workers have between 18 and 28 years of work experience in their field, but because the employer has not paid their retirement insurance premiums, they are facing difficulty retiring. HRANA writes: “Derek Dam workers were not aware of the fact that their premium have not been paid before, and they do not know why their wages are not being paid.”

Considering the economic situation in Iran, and the fact that even if these workers had been paid for the past seven unpaid months of their labour they would have had to work an additional 4-5 overtime hours to barely manage some kind of existence, we urge these workers to immediately consider protesting against this criminal deed of the employer.

Whether the employer directly and by itself is or is not capable of paying workers’ wages is not of any significance for the survival of these workers and their families. It is not far-fetched, in the extremely corrupt economy of the Islamic regime, to presume that these workers’ wages have been deposited in the management’s private accounts in Qatar or in European banks.

Irrespective of what has become of their wages and how, these workers have the right to their wages and their children have the right to be fed and clothed like the children of the managers and parasites and blood suckers and shareholders of the dam company. Derek Dam workers know that in the Islamic wilderness of Iran, millions of workers are not only living far below the poverty line due to underpayment, but have been deprived from their criminally low wages too. Both employer and of course the Islamic government are responsible for providing these workers with their wages. No excuse should be even considered. Workers at Derek Dam are not in a unique situation. The fact is that delayed wages have become the unofficial status quo of the Islamic system of labour, and the dam workers indeed share the same miserable situation as millions of others in Iran. It is a choice: either demand their unpaid wages and management’s commitment to paying their retirement and social security premiums, and get ready to go to barricades to impose their right to live, or it remains as it is today, with seven months of unpaid wages and ever-increasing exploitation, an acceptance of starvation and social regression.

We urge Derek Dam workers to do exactly the same thing that thousands of their brothers and sisters are doing from Banir Dam in Marivan to Bandar Imam Petrochemicals: organize themselves, chose their representatives carefully and wisely, and demand immediate payment of their wages inclusive of interest according to the official bank rate.

Derek Dam workers have nothing to lose; they have 7 month of wages, their insurance coverage, and the employers’ apology and guarantee of punctuality of payment to achieve as the first priority.