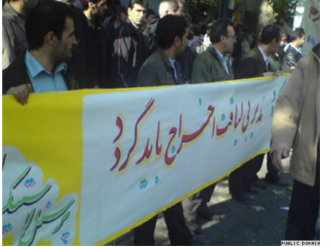 4 November 2012: Following the strike and the ultimatum of escalating the protest by workers at Kimia and Faravarsh Companies at Bandar Imam Petrochemical Complex, Faravarsh workers ended their strike after reaching an agreement with the management. Kimia workers’ strike continued today.

We previously reported that the employer of workers at the Bandar Imam Petrochemical Complex had accepted workers’ demands to eliminate contractors and middle-men and sign direct contracts with all workers. This was a great victory and indeed a new beginning for the entire working class of Iran, which has been on the defensive for a long period of time, having been shattered into disorganised and shapeless fragments, and forced to retreat from many social and economic demands due to the violent suppression against activists and organizers in various areas of production and services. Petrochemical workers’ protests and related strikes and gatherings led to one of the most important triumphs of the Iranian working class, especially in an area of Iran’s economy that is strategically important for the class.

It is common knowledge among the working class that under the rule of capitalism, every success is as permanent as the ever-changing balance of power between the oppressors and the oppressed. In the case of the petrochemical workers’ struggle to categorically eliminate the parasitic contractors and pursue their vital social and economic interests in direct, face-to-face interactions with their employer, it was expected that the contractors, which constitute an essential foundation of the Islamic regime’s corrupted economy and an effective tool of economical and social violation of employees’ rights, would be exceedingly difficult to eliminate. Everybody knows that the management of contracting companies, who usually are either themselves a part of the Islamic regime’s political establishment or are connected to centers of power, go to great lengths to defend their enormous parasitic interests in robbing the people of their livelihoods. And of course the Islamic government itself – as a major capital owner and employer in the most vital sectors of production including oil, mining, auto industries, transportation, etc. – has a multifaceted interest in maintaining and protecting the contracting companies, and in not facing the workers directly but through a middle man.

A few months ago, after 3 rounds of protests and strikes, the employers and contractors were finally forced to retreat and then accept the demand of a direct contract between the employer and employee as result of the petrochemical workers’ radical action, and out of fear of strike in other complexes and refineries. Of course, it was not unexpected that they would try to hit back by all available legal and, moreso, illegal measures, and seek to reverse this victory – a victory which was, despite shortcomings in organization and unified action, a turning point that promises both political and social progress by the working class across Iran and by workers in every sector – workers who are now pushed against the wall and literally forced to defend their existence.

The magnificent and triumphant struggle of Bandar Imam and Mah-shahr’s Petrochemical workers started more than a year and half ago, and resulted in a tremendous victory, a victory that was radically undermined by both the contractors and the Bandar Imam Petrochemicals employer’s shameless sabotage.

We reported that Bandar Imam’s petrochemical workers went on strike on 31 October 2012, and gave the employer an ultimatum to fulfill its part of the agreement regarding direct contracts and elimination of middle-men from the worker-employer equation. The following report was published by IIWU:

Following the strike and the ultimatum by workers at Kimia and Faravarsh, workers at the Bandar Imam Petrochemical Complex, Faravarsh’s workers, resume work after an agreement with the employer; Kimia workers have continued their strike (4 November 2012)

Iranian Independent Workers’ Union: Following the inception of strike by workers whose employment status had not been changed at Kimia Company by last Saturday, and at Faravarsh by Tuesday, and following the authorities of Bandar Imam’s Petrochemicals’ ignoring of the workers’ demands, the workers declared last Wednesday that if their demands have not been considered by Sunday (4 November 2012), they will resume protest as before by gatherings and marches outside the Bandar Imam Petrochemical Central Office.

According to reports observed by IIWU following this ultimatum, the Faravarsh Company’s management was forced to meet with the striking workers and start negotiations today, Sunday 4 November 2012. In this meeting, the management promised to follow through on complete implementation of the resolution regarding the removal of contracting companies. However, the striking workers demanded the necessary guarantees from the management. Thus, the following written agreement was reached by the representatives of workers and the management, and signed by the two parties:

1 – Management pledged to follow up on changing the status of those workers who are still contracted as soon as possible.

2- It was decided that 150,000 touman monthly, which was supposed to be paid to the workers whose contract status has not yet been changed but has not been paid in the past several months, would be paid retroactively to these workers. Additionally, another 150,000 touman production bonus is to be paid to these workers on a monthly basis until their contract status has been changed and the contracting companies are altogether eliminated.

3- The management has committed to deposit 1,500,000 touman – the sum that the management owes workers for the essential repairs – into workers’ accounts as soon as possible.

MFI congratulates the success of the Faravarsh workers in forcing the management to accept its responsibilities, and we wish the same for the Kimia workers. Side by side with the petrochemical workers, we will monitor the actions of the management in fulfilling its commitments and update our readership, especially our comrades in the international labor movement, who are anxiously following the class struggle in Iran and hoping for Iranian workers’ success in its bigger challenges: organizing and unifying itself across trade sectors and all over Iran.