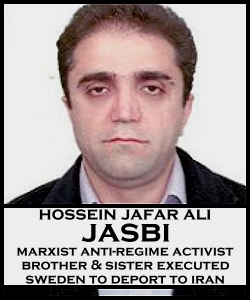 Mr. Billström! Stop Deporting Marxists, Christians, Women’s Rights Activists, Journalists and Bloggers to the Prisons and Gallows of the Islamic Terrorists in Iran!

Mr. Billström! If anyone has forgotten, you should certainly remember that last year we, the international human rights activists, stopped the Swedish Migration Office from committing a number of “mistakes” which could lead to personal or even social tragedies for us Iranians, and of course a political scandal for your government.*

We stopped the Swedish government from deporting a number of Iranian political activists, among them a number of very well known personalities such as Marzieh Kamangar. Your migration office only realized that they were about to break international laws and conventions when international human right activists went so far as to organize international campaigns and demonstrations. In some cases, we even brought in European trade unions such as CGT in support of demands to stop those strange and very irrational decisions.

We are indebted to all those who helped us to stop those illegal deportations, and we are thankful for living in an era in which activists from all over the world — Swedes, Norwegians, Americans, Dutch, Iranians, Australians, French — can align in defense of humanity and support those Iranian activists that the Migration Office, on your watch, was about to deliver to the regime of Islamic murdering thugs. You should be thankful too!

Mr. Billström! It is possible that many Swedes do not know yet, but you are well aware of the fact that your government and its predecessor have committed despicable crimes by delivering those who sought refuge at your door to barbarian dictators and butchers like Bashar el-Assad and Hosni Mubarak. It is regrettable, and we are saddened that we, the humane Sweden and the international front of humanity, were not able to stop those recent deportations of Syrian activists to the hands of the Assad’s regime, or Iraqi gays to Iraq, where homosexuals are being beaten, arrested, tortured and even killed with the blessing of a reactionary political entity. We are determined to do our utmost to support the rights of all who are under threat of persecution, Iranians as well as non-Iranians.

Evidently, Mr. Billström, the Migration Office, after a short pause, has resumed its haunting of Iranian activists and dissidents who seek asylum in Sweden. There are a number of Iranians who were recently detained and are under imminent danger of forced deportations. And there is an even larger number of fearful Iranians who were denied their right to refugee status by your Migration Office only because we, the Iranian millions have failed to convince your government that the Islamic regime is nothing more than a criminal gang of terrorists, murderers and rapists, and not only they do not and have never in the past 33 years represented Iranian people but with the deplorable blessing of the international community have maintained power by genocide and mass executions. Yet you do not seem to be convinced!

You seem not to be convinced that the Islamic regime is not an entity to which you can send back political dissidents and religious converts, despite the sacrifices our people have made;

despite Kahrizak and Evin and Gohardasht and hundreds like them;

despite tens of thousands imprisoned;

despite years of peoples’ armed resistance in Iranian Kurdistan;

despite atrocities committed and being committed infront of your own eyes, against the Iranian Arabs, Baluchis and Turkmens;

despite the bloody crackdowns on students, workers, teachers, journalists and bloggers;

despite genocide committed by this regime and a deliberate, criminal cover-up by the international community and its security council;

despite the manifestation in 2009 by millions of Iranians of their disgust with barbarity of shari’a law, gender apartheid and this savage dictatorship!

Mr. Billström! You don’t seem to be convinced, and this puzzles us. Is it even possible that your office and your government has deliberately chosen to ignore its legal let alone moral responsibilities?

Mr. Billström! You certainly are aware of the political situation these barbarians have deliberately brought on our people and others in the region.

While the regime of the Islamic terrorists is openly targeting innocent civilians in other countries like Georgia, India, Thailand;

…while every one, including your own office, is well aware of the Islamic regime’s intentions and capabilities to monitor movements of the opposition outside Iran and especially in Europe to eliminate the opposition through terror, assassination and intimidation;

While these murderers have no other means of maintaining their reign but jail, torture, execution;

and while there have been more than 60 executions in just the past 2 months,

…you have intensified hunting and arresting and threatening deportation of Iranian asylum seekers.

Haven’t you heard that the hellish prisons of the Islamic regime are overflowing with journalists, bloggers, union activists, women rights activists and people who were just caught with Facebook accounts?

While you should be aware all the above, it bothers us to see that despite undeniable evidence and the background of atrocities committed against people like the Iranian convert Mohammadreza (Maxim) Hamedian Esfahani (#11-084450/11), you nevertheless make every effort to evade international law and return him to serve out the next 10 or more years as a political prisoner under torture in Iran!

We along with many other human rights activists have been wondering what exactly your officials are trying to accomplish when they not only deny Hosein Jaafar Ali Jasbi (#11421539) his right to asylum, but arrest and prepare to deport him despite undeniable evidence of his activities against the Islamic regime as a Marxist and active member of an organization that has fought against the Islamic regime since its first day!

Wouldn’t a sane person question your migration office’s competence and judgment, knowing that Hosein’s brother and sister have already been executed by the regime of executions, and his father has spent years in jail for political dissent?

It bothers us as Iranian dissidents that your government at this time, while knowing that a popular revolution against the regime of Islamic butchers is imminent, chooses to intensify hunting, arresting, and deporting Iranian dissidents.

Mr. Billström! In the light of the above, we hope that you choose to take position in favour of Iranian people in their quest for freedom and a humane society, and instead of sending Mohammadreza Hamedian Esfahani, Hosein Jaafar Ali Jasbi, Yasin Elyasi, and other Iranian asylum seekers who have turned to the Swedish people for refuge, to the jails and the gallows of the Islamic regime.

Instead, you should support us to free the priest Youcef Nadarkhani, and to stop executions of Zanyar and Loghman Moradi, Saeed Malekpoor, Shirko Moarefi, and hundreds of other political prisoners, and prisoners of conscience in Iran.

Iranian people are already indebted to the humanity of the Swedish people. We will not forget the generosity and solidarity of our friends in times of hardships.

* There are a number of political prisoners under imminent danger of execution like Loghman and Zanyar Moradi (accused of being Marxists and confessed under threat of rape to an act they never committed); and Saeed Malekpoor, a Canadian-Iranian computer programmer who is to be executed imminently because the ignorant of the “judiciary” do not approve of how his computer programs have been used by third parties; or Shirko Moarefi, a former leftist activist, accused of “Moharebeh.” These are only a fraction of those under threat of execution.