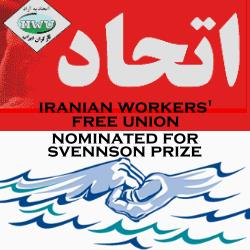 Ahmad Fatemi, member of Unionen in Sweden and director of Mission Free Iran, has nominated the Iranian Free Workers’ Union for the Arthur Svensson International Prize for Union Rights.

The Svensson Prize is presented to a person or organization who has promoted union rights and/or strengthened unionization. The prize was established by Industri Energi, a Norwegian federation of trade unions that organizes employees in the field of oil and gas, chemical industries and woodworking industries, in honor of Arthur Svensson (1930-2008) who was one of Norwegian Trade Union Movement’s most prominent representatives and whose legacy in Norwegian society has had profound effect by creating better conditions for Norwegian workers.

The text of the letter of nomination of the Iranian Free Workers’ Union for the international award appears below:

To Espen Løken and the Nominating Committee for the Arthur Svensson International Award for Union Rights:

We thank you for this opportunity to submit the name of the Iranian Workers’ Free Union (IWFU) for the 2012 Arthur Svensson International Award for Union Rights. We believe IWFU’s ongoing struggle for union rights in Iran marks it as an organization worthy of this award given in honor of Mr. Svensson’s legacy.

About the Iranian Workers’ Free Union:
The IWFU was founded in November 2006 under a regime that criminalizes the formation of free and independent unions. Prior to 18 April 2008, IWFU was called the National Union of Expelled and Unemployed Workers.

Objectives and Accomplishments of the Iranian Workers’ Free Union:
Since its establishment, IWFU has tried to do exactly what a workers’ union is supposed to do (1), and if there is a difference, it is due to the price that IWFU members and especially its elected leaders have paid and continue to pay under the brutal dictatorship in Iran.

Most recently, several executive board members of IWFU have been arbitrarily detained, one after the other in rapid succession, for demanding that the authorities provide services to people who, due to grinding poverty, have resorted to living on the street. On this occasion, as on many others, IWFU has successfully represented its members’ political and social rights by organizing protest actions and mobilizing the society. As a result, two of these very well known and respected labour activists, Mozaffar Saleh Nia and Sharif Saed Panah, have been released. However, Shith Amani, another executive board member of IWFU, remains in jail. Notably, no charges have been brought against any of the three (2).

The Iranian Workers’ Free Union was a key participant in the declaration of what is certainly one of the world’s most progressive set of demands as Iranian workers’ minimum demands. There, IWFU manifests its indisputably humane position in support of complete gender equality and unrestricted recognition of all childrens’ rights, and against poverty and racism, among other demands (3).

In sum, because of their ongoing struggle to promote the rights of workers, unions, the working class, and the unemployed, we nominate IWFU for the Arthur Svensson International Award for Union Rights.

Submission of Nomination:
This nomination is being made by myself, Ahmad Fatemi, an active member of Unionen in Sweden, on behalf of Mission Free Iran, an organization that supports the struggle for freedom and equality in Iran and worldwide. There is no direct relationship between myself and the IWFU; however, my organization Mission Free Iran has supported individual members of IWFU to establish refugee status after they were forced to flee life-threatening political persecution in Iran based on their demands for workers’ rights.

We thank you for your considered attention to this nomination.

“The union recognizes itself as a vessel for all Iranian workers to reach their goal: a humane life in accordance with modern standards and the progression towards a humane society for the working class.” — Article 4, Objectives of the Iranian Workers’ Free Union.

Footnotes:
(1) From the IWFU by-laws, Chapter One: Definitions and Objectives, Article 3: “The Union is the legal representative of its members in negotiations with government, employers, and mediatory bodies. They can represent non-members upon request.”

Two worker activists by the names Sharif Saed Panah and Mozaffar Saleh Nia, both members of the Free Union of Iranian Workers, who were arrested earlier this month, have been released on bail. The release follows several weeks of campaigning both inside and outside Iran. The released workers were jubilantly greeted by their family and supporters outside the offices of the Ministry of Intelligence in Sanandaj.

However, a number of other trade unionists have been detained, or summoned to the Intelligence Ministry: In Tabriz, Shahrokh Zamani and Mohammad Jarahi were detained while out on bail, while Nima Poor-Yaghoub and Sasan Vahebi-Vash were summoned. Zamani and Jarahi are both members of the Follow-up Committee to Set up Free Labour Organisations. Last August, a court sentenced all four to long prison terms: Zamani to 11 years, Jarahi to five years and six months, Poor-Yaghoub to six years and Vahebi-Vash to six months.

Almost simultaneously in Sanandaj, Sheis Amani, well-known leader of the city’s textile workers and a board member of the Free Union of Iranian Workers, was detained when enquiring about the cases of other jailed workers at the Prosecutor’s Office.

We call on all trade unions and human rights organisations to condemn the latest arrests and the continued jailing of trade unionists, and to demand the immediate and unconditional release of all those detained.

(3) On 10 February 2010, IWFU and 3 other Iranian workers’ unions issued the Charter of Iranian Workers’ Minimal Demands, presented below. The 3 other unions were: Union of Workers of Tehran and Suburbs Bus Company, Haft-Tappeh Sugarcane Industry Union, and the Association of Kermanshah Electricity and Metal Workers:

10 Februrary 2010: Joint declaration by Iran’s four main independent trade unions
Charter of the minimum demands of workers in Iran
On the 31st anniversary of the 1979 revolution

Thirty one years have passed since the February 1979 revolution. At that time millions of Iranian people, full of hope for a better life, took to the streets in order to break the yoke of despotism and repression. A nationwide strike led by workers at the National Oil Company, the vanguard of the Iranian working class, shut down oil pipelines, ultimately tearing the despotic regime asunder. Masses of people chanted, “Our oil workers! Our resolute leaders!” Power fell to the people.

February 11, 1979, a day that marks an end to despotism, is a day that calls forth unforgettable memories of men and women, young and old, who had grown tired of repression and injustice; people embraced one another in the streets, cried with joy, and, with tears in their eyes, looked forward to a liberated future.
Now, 31 years have passed since those glorious days full of enchantment. Yet, today the feelings of hope and enchantment have been transformed into nothing but misery, destitution, unemployment, sub-poverty line wages, and cuts in subsidies – i.e., unbearable agony for millions of workers and wage earners.
However, life continues. And, the Iranian people still have a burning desire for change. They have not lost their hope for a human, happy, prosperous and free life.

In the past few years workers of Iran bravely fought for their right to life and dignity with their strikes and protests and by setting up their independent organisations. And today many of them sit in jail for attempting to organise and for wanting a human life.
But these jail cells do not mark the end of the road. We millions are the producers of the wealth that exists, and the wheels of production are in hour hands. And we have as our historical support the experience of the united and magnificent strike of the oil workers during the February 1979 revolution. Relying on this experience and the power of our millions and inspired by the humanistic aspirations of the 1979 revolution, today, after thirty one years, we present our minimum demands and call for the immediate and unconditional realisation of them all:

1. Unconditional recognition of independent workers’ organisations, the right to strike, to organise protests, the freedom of assembly, freedom of speech, and freedom of political organisation;

2. Abolition of the death penalty, and the immediate and unconditional release of jailed workers’ and other social activists;

3. Immediate increase in the minimum wage based on workers’ input through their representatives in workers’ general assemblies;

4. And end to the ‘Rationalization of Subsidies Plan’. All unpaid wages should be paid immediately without any excuses;

5. Job security for workers and all wage earners; an end to all temporary and so-called ‘blank signature’ contracts; removal of all government-run organisations in the work place; drafting of a new labour law through direct participation of workers’ representatives elected by their general assemblies;

6. Halt to all firings and layoffs under any circumstances and excuses. Anyone expelled or any unemployed person who has reached the age of employment must benefit from an unemployment benefit at a level that affords a human life with dignity;

7. Abolition of all the discriminatory laws against women; ensuring full and unconditional equality of women and men in all social, economic, political, cultural, and family fields;

8. Ensuring to all the retired a life of welfare, free of economic anxieties; putting an end to all discriminatory payment practices, and enabling them all to benefit from social and medical services;

9. All children, irrespective of their parents’ economic and social status, and of gender, nationality, race and religion, must be granted free and equal educational, welfare, and health care benefits;

10. May Day must be declared a national holiday and included in the official calendar; all legal restrictions on its celebration must be removed.