Crackdown on Christian “Apostates” in Iran 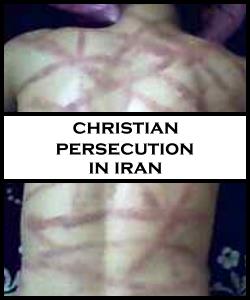 Many of the asylum-seekers Mission Free Iran supports have fled persecution in Iran due to their Christian faith. To support their applications for asylum, we gather reports demonstrating the persecution of Christians in Iran and submit them to decisionmaking authorities. Here, we post those selected news items on Christian persecution in Iran from the latter half of 2011.

Under Shari’a law, which is the law of the land in Iran, the penalty for apostasy – conversion from Islam to another religion – is death.

Despite the fact that no articles in the Islamic Republic’s legal code currently refer to the crime of apostasy, presiding judges base their opinions on texts by Iranian religious scholars, and prosecute Christians accordingly in the courts.

Internationally-known examples of this phenomenon include the ongoing case of 35-year-old Christian priest Yousef Nadarkhani, who is currently facing execution for apostasy (c.f. [1] and [2]). Another Christian pastor, 33-year-old Behrouz Sadegh-Khanjani, remains imprisoned and is facing a possible indictment for apostasy in the southern city of Shiraz ([3]).

A Christian Iranian asylum-seeker, Keivan Soufastaie, whose case documents included a court summons to be tried for apostasy by the Islamic Republic of Iran, recently won his struggle for asylum in Sweden after nearly being deported [4].

It is well-recognized that in Iran, there is a violent wave of apostasy-related persecution of Christians that extends even to the Armenian Christian population, who cannot be considered apostates because they were born into Christian families.

Below is selected documentation of the ongoing crackdown against Christians in Iran, limited to news from August through December 2011.

In August 2011, there was an internationally-reported incident of burning of 6,500 Christian Bibles in Iran (c.f. [6]) – one incident among many similar such incidents of repression of people who believe in Christianity in Iran.

26 August 2011: Pastor Haghnejad, an evangelical Iranian pastor, has been re-arrested, with his family unaware of his whereabouts or reasons behind his arrest. Ten other members of his denomination were also detained. [7].

6 September 2011: Iranian Christian Mehdi Forootan Pays for Faith with 105 Days in Evin Prison – his parents signed over the deed to their home as bail to secure his release. [8]

6 September 2011: 5 Iranian Christians convicted of crimes against Islam (Behrouz Sadegh-Khandjani, Mehdi “Petros” Furutan, Mohammed “William” Belyad, Nazly Belyad, and Parviz Khalaj) – which, importantly are construed by the regime as crimes against the state [9] – were ordered to report to prison to serve one-year prison sentences. Nazly Belyad was 7 months pregnant when the summons was issued in early September. [10]

12 September 2011: Two Azeri converts from Islam, Vahid Roofegar and Reza Kahnamooee, who were arrested by security officers of Islamic Republic of Iran on charges of Christian activities, were released temporarily on $40,000 bail after appearing before two separate court hearings. The initial charges against them were of “apostasy,” later changed to “propagating idealogies against the regime and threatening the national security.” [11]

20 September 2011: The agents of the intelligence ministry threatened a Christian couple, took their child captive and demanded that they file a complaint against their fellow Christians who are being held in prison. [12]

23 September 2011: Iran’s Watch on Christians Intensifies, Says Open Doors. The Iranian government’s tracking of Christians in Iran has intensified over the last several months, according to Open Doors USA, an organization that provides help to persecuted believers in Jesus worldwide. In Iran, Christians gather in house churches, which are being increasingly discovered. Members are then subjected to various forms of harassment, including imprisonment, job termination and separation from family. [13]

2 October 2011: Eleven Iranian Christians who fled Iran in the wake of a government campaign against evangelical Christianity have received threats via email from ‘the unknown soldiers of the Hidden Imam’ calling on them to either repent or face extra-judicial execution. The ‘unknown soldiers’ are alleged to have links with Iranian security services. [14]

11 October 2011: Pastor Behnam Irani of the Church of Iran is currently serving a five year sentence, whilst Farshid Fathi Malayeri, who belongs to a different denomination, remains detained without charge nearly eleven months after his arrest. Church leader Noorollah Ghabitizadeh, who was arrested on Christmas Eve in 2010, is still being held in Ahwaz and, according to Mohabat News, has been verbally informed he may receive a death sentence: [15], [16] & [17].

21 October 2011: Fariborz Arazm, a Christian convert who resides in the city of Robat-Karim was arrested by the Islamic republic officials. On Monday, October 17, a group of four officers raided Fariborz’s house, arrested him and transferred him to an unknown location. They confiscated Fariborz’s computer’s hard disk, CDs, Pictures and a number of Bibles. The family also were threatened to remain silent and not to talk about this incident to anyone. Fariborz Arazm, 44, is the father of two children. He has not been able to contact nor visit his family since the arrest. [18]

6 November 2011: The “Saint Andrea church” in the city of Kerman has been demolished by city authorities despite being listed as a protected national monument. [19]

20 November 2011: Attack on Christian couple soon after their release from prison in Hamedan: 29 year-old Mr. Arash Kermajani and his 26 year-old wife Mrs. Arezoo Teymouri were one of two married couples who had been taken from their home by agents of the Ministry of State Security of the Islamic Regime in September 2010 and held imprisoned for 8 months without ever being formally charged. After their release from prison, they were forced into hiding and eventually leave their country for fear of their lives as a result of threats by elements of the Islamic Regime. [20]

13 December 2011: Mr. Ehsan Behrouz a young Christian convert student has been re-arrested in the city of Mashhad by the agents of State Security of the Islamic Regime despite the previously paid bond of US$80,000. He had been previously arrested along with 15 other recent converts to Christianity. It is now over 5 weeks since anyone has seen or heard of Ehsan (Since November 7, 2011). His family seems to have been warned and threatened into silence. [22]

14 December 2011: Alireza Seyyedian, 36, a Muslim who converted to Christianity six years ago, was sentenced to six years in prison by Branch 26 of the Revolutionary Court for having been baptized in Turkey. “The judge said that by having his baptism performed in Turkey, he propagated against the regime. The judge’s interpretation was that by having his baptism in Turkey, my client’s intent was to express the lack of freedom in Iran. The other allegations against my client were distributing videos of his baptism on the Internet and holding various interviews about [the baptism]. He is also charged with running a home church.” [23]

For these reasons, governments should recognize that returning Christian Iranian asylum-seekers to Iran would constitute a violation of international refugee law.