The Workers’ Egypt is Not the Same Old Egypt 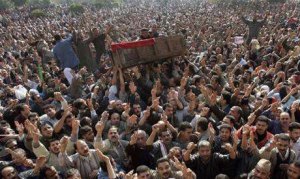 by Ahmad Fatemi
(This article was first published in Farsi in “Anternasional” # 424.)

On Saturday, the 22nd of October, an Egyptian army officer beat up a worker. Do you remember what they have said about revolutions and the effects they have on people and their culture? Nine months ago, beating up a worker never, anywhere in Egypt, was news. These workers, these “down-at-the-heel, uncultivated illiterates” were not even counted among human beings, let alone considered to have rights, to have social status and positions, to deserve respect. These were created by the God of capital to be exploited, the life squeezed out of them in factories, at workplaces and ports, on farms, on the street corners, in posh tourists’ quarters. They were created to be battered, to be humiliated, to be the grateful recipients of thrown crusts of bread – and even that with a lot of “buts” and “ifs.”

What has been done to the Egyptian workers in the past half century, and especially during the reign of Mubarak, has been hellish. Naturally, Egyptian laborers’ and working peoples’ submission to all of this humiliation and disrespect — going with an empty stomach and only dreaming of bread; watching their loved ones perish and yet biting their lips in bitter silence; living in intolerable, dusty, dirty holes; going thirsty on the shore of the Nile; a thousand times a day calling disrespectful, worthless snobs “Afandi,”* and with each repetition of these word sinking even more in self-respect, becoming ever more humble yet swallowing this historical complex,– was a pre-condition of preserving such a hell for Egyptian workers, this paradise of capital, of which the residents of the White House have been so proud over the past decade.

Capitalists have learned through experience that it is not easy to preserve a balance in which the physical survival of one side depends on revolt against the other: the entirety of the existing order, and the guardians of that order. In order to preserve this intolerable hell; in order to force starvation, slavery and extreme poverty, and absolute lack of security and rights on millions of Egyptian workers, these real owners of the society; in order to institutionalize humiliation, impotence, and lack of will; the rulers of Egypt – the managers of the society – and their global masters needed a gigantic apparatus of crime and suppression, illusion, deception and dissemination of superstition and religions. They needed an Interior Ministry with a million and a half police and snitches and wardens and torturers and sheykh alazhar** and bishops and a herd of mullahs and priests, and radio and tv, and singers and filmmakers and newspapers and exorcists and judiciary system and lawyers and generals and commandoes and millions and millions of dollars of budget. But maintaining in perpetuity that capitalists’ paradise – that human hell – is a dream that the workers, this time from Egypt, prove is an empty one.

On the 22nd of October, an officer and 4 soldiers beat up a worker, and 9 months ago, this was not news. Today, all of Egypt and workers all over the world even know the name of the worker who was attacked and humiliated by that officer and his four soldiers. His name was Khaled Gilani. Now you and I too know that Khaled was a worker at Mesr-Iran Textiles. He was protesting his and his worker brothers’ and sisters’ situations. He demanded nationalization and expulsion of the management of the factory, and today, everyone all over the world knows that Khaled Gilani was representing workers who had been protesting for 3 days against corruption and mismanagement, workers who had occupied and blocked one of the roads to the Cabinet and stopped all traffic.

Mesr-Iran Textile workers occupy and block roads today, they are out there demanding their rights and enforcing their will. They have already kicked out Tantawi’s former master, Mubarak, this favorite puppet of the West, and yet Tantawi and his hard-headed officers are still daydreaming about the old days. The whole Egyptian society has been shaken, but this lot has not awakened from their sleep. Today is not 9 months ago. Today, Egyptian workers, these creators of all wealth, these real owners of Egypt, the same “down-at-the-heel, uncultivated illiterates” demand what is rightfully theirs: Egypt! The same day that Khaled was beaten, Egyptian unions, labor organizations, leftist organizations, lawyers, lawmen, and freedom-loving celebrities of Egypt issued a joint statement adding another demand to their existing legitimate demands: An officer who has dared to lift his hand against a worker must be prosecuted. Workers demand the expulsion of a corrupt manager at the factory, and their other demands of course must be met…. And Egypt today bears no resemblance whatsoever to Egypt of 9 months ago.

* “Afandi” is a Turkish word that comes from feudalistic culture that means “the Lord.”

« Activists in Washington DC Join Cities Worldwide in Protest Action to Support Workers in Iran on November 6, 2011
URGENT: Execution of Sakineh Ashtiani Believed to be Imminent: 5 Things You Should Do NOW »

Error: Twitter did not respond. Please wait a few minutes and refresh this page.