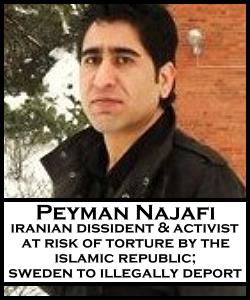 PLEASE SEND THIS SAMPLE LETTER (adjust to your own taste) TO STOP THE ILLEGAL DEPORTATION OF IRANIAN ACTIVIST PEYMAN NAJAFI.

Peyman’s illegal deportation by the government of Sweden is scheduled for 12 August 2011. The Swedish government has already bought his tickets and is determined to send him to detention, torture, and possible execution. It is up to us to do all in our power to stop this crime. Peyman is counting on us.

To Tobias Billström, Minister for Migration and Asylum Policy, Sweden, regarding Peyman Najafi (case no. 1346710):

I am writing to you to demand an immediate halt to the deportation of Iranian Peyman Najafi, an Iranian asylum-seeker who has sought refuge in Sweden from persecution by the Islamic Republic of Iran (case no. 1346710).

It is illegal under international law for any country including Sweden to deport a person who has a legitimate fear of persecution in their home country.  It is therefore undeniably illegal under international law for the Swedish government to participate in the crime of deporting Peyman Najafi to Iran, where he will be detained, tortured, and possibly executed if he is returned to the blood-soaked hands of the Islamic Republic.

The Swedish government has repeatedly violated the rights of asylum-seekers.  On September 3, 2010, in the case of R. c. v. Sweden (application no. 41827/07), the European Court of Human Rights in Strasbourg found that deporting an Iranian dissident to Iran would be a violation by the Swedish authorities of Article 3 of the European Convention on Human Rights and Fundamental Freedoms, “No one shall be subjected to torture or to inhuman or degrading treatment or punishment.”

Yet despite this finding, the Swedish government continues to illegally attempt to deport Iranian activists like Navid Mirpourzadih, Sanan Ashrafi, Marzieh Kamangar, Mehdi Maleki, Keivan Soufastaei, and others, all of whom are clearly and undeniably at risk not only of detention and torture by the Islamic Republic of Iran, but at unquestionable risk of execution.

We demand an urgent, immediate halt to Sweden’s intended illegal refoulement of Peyman Najafi, who is at clear risk of execution if returned to the Islamic Republic. Given the the Migration Office’s blatant, repeated violations of international law regarding refugee rights, risking the lives of Iranian and other asylum-seekers, we demand that Sweden must not only immediately halt the illegal deportation of Peyman Najafi, but must immediately cease all deportations to Iran.