Protest the Executions of Mohammad & Abdollah Fathi! No Peace for the Islamic Republic of Murderers!

Today, 17 May 2011, at 10:45am, in protest against this morning’s depraved and barbaric murder of Mohammad and Abdollah Fathi by the Islamic Republic, Mission Free Iran visited the regime offices in Washington DC and papered their wall with a protest sign reading, “DOWN with the Islamic Republic of Murderers! We Do Not Forget Our Beloved Mohammad and Abdollah Fathi!”

Islamic Republic staff were doing office work just on the other side of the glass wall that faces the street. Although at one time, regime office staff would rush out and rip protest signs down (if we could get close enough to post any), and they would curse and shout at protesters, this time, as on recent previous occasions, regime staff said and did nothing.

Iranians in the vicinity waiting to conduct paperwork asked if the boys had been executed; I told them yes, they had been hung this morning. They looked sad. Passers-by read our sign with great interest. Several people indicated approval of our action.

We waited to confront office staff, but none emerged. IRI staff on the other side of the glass did nothing but watch. 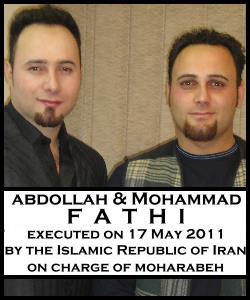 Mission Free Iran calls honorable people worldwide to go out to the Islamic Republic’s Embassies tonight with blazing candles and hold a vigil for Mohammad and Abdollah Fathi and for the thousands upon thousands of beloved that have been murdered by this criminal and barbaric regime over the past 32 years. We should continue nightly vigils in front of this bloody regime until it falls, reminding them that we will not stop our struggle against these criminals until they have been removed by the Iranian people.

2 thoughts on “Protest the Executions of Mohammad & Abdollah Fathi! No Peace for the Islamic Republic of Murderers!”