Human Rights, Not One More Execution

Interview with Mother of Mohammad and Abdollah Fathi, Two Young Men to Be Executed on 17 May 2011 on Charges of “Moharabeh” (English Translation)

In this interview with NCTV, the mother of Abdollah and Mohammad Fathi tells about the situation of her two sons, who are to be executed tomorrow at dawn, 17 May 2011, on the nebulous charges of “Moharebeh.” Notably, one of the boys, Mohammad, who was born in a war zone during the Iran-Iraq war, has had severe developmental delays; he did not speak until he was 8 years old. An extensive interview with their father has been published by the Committee of Human Rights Reporters (in Farsi) and translated to English by Freedom Messenger.

We must all urgently do whatever is in our power to stop the execution of these two boys. There are only a few hours remaining to stop the Islamic Republic from shedding more blood. Tehran time is 8.5 hours ahead of US Eastern Standard Time – usually executions take place at dawn.

Please urgently call the prison in Isfahan where they are being held and demand that the murder of Mohammad and Abdollah Fathi be halted. If you speak English or another non-Farsi language, you can simply say slowly “Do not kill Mohammad and Abdollah Fathi.” They may find someone to speak to you in English, or they may hang up the phone. Either way, you will have made a difference. PLEASE URGENTLY CALL Country Code (98) 311-333-3333 and 311-788-5881.

The English transcript appears below the Farsi-language video interview:

TRANSCRIPT OF INTERVIEW WITH THE MOTHER OF MOHAMMAD AND ABDOLLAH FATHI:

Shahla: This is very shocking – it is a good opportunity to tell us whatever you would like to say.

Why they are rushing to do this? My children have problems. If they didn’t have problems, they wouldn’t be in this situation.

Shahla: What do you want to tell to the people of Isfahan?

Mother: This morning when I went to the prison, they didn’t let me meet my children. I asked them, “Even if you don’t let me talk to them, at least let me see them from afar.” But they refused.

I’m begging anybody who supports humanity and justice, please know that there’s nothing in the law that would permit this execution.

The attorney general was saying in a program that the crime of armed robbery would receive a sentence of 15 years punishment. So why are my children being executed. So why are they hurrying to kill them?

They have my children in their control, they can’t do anything – so why are they hurrying to execute the children? Even if these children were fire, even if they were fire, they couldn’t burn anybody in the prison.

Shahla: They’re hurrying the execution because they see people are suffering and in poverty, which might lead to unrest if they don’t put fear into people by these executions.

He didn’t let me say a word, and he even ordered to me to be thrown out of his office. Doesn’t his office allow such a thing, or was it just a personal grudge?

I want everyone else to judge. I am not a judge. This seems to be against justice. I wanted to go to kiss his foot [beg for clemency], and they threw me out.

They are both married. He didn’t even bother to find out whether they are married or not.

Shahla: Do they have children?

Mother: No – they don’t have children. One of my children has been under medical care from the time he was 4 years old – his case is on file in the hospital for the disabled.

Mohammad – he couldn’t talk until he was 8 years old. And if you talk to anybody in the world, they would say that his condition is a result of the war [editor’s note: it seems that the children were born in a war zone during the Iran-Iraq War, and have been affected by chemicals released during the conflict].

I want you to do whatever you can do – my husband and I have given a lot of service to this country – we were both teachers. As teachers we could not have raised bad kids. Who can give me an answer for this? I just don’t have an answer.

Shahla: This is very painful. I want the people of Isfahan to gather in front of the prison, not at 6am but even before; you shouldn’t give the opportunity to them to do this.

Mother: I bow in front of anybody anywhere in the world who can do the smallest thing for my children.

Shahla: From everywhere in Isfahan province, people have been watching our program, and they have declared their support.

Mother: I’ve been there [to the prison] crying to see my children, and they told me under no condition do you have permission to meet with them.

I don’t discount whatever crime they might have committed, but whatever they have committed, they have to be prosecuted according to the code of the law. Moharebeh – they cannot accuse them of moharabeh! These two children have never shed blood at all in their lives! Don’t think that just because I am their mother I am saying this. The government agent who came to my door, they told me the boys have not shed even one drop of anyone’s blood.

You tell me, how is it that someone who has not committed any killing should be executed?

I want all the people who implement the law, and even the leadership of Iran to listen to this – this thing has to be done lawfully.

[editor’s note: according to the interview with their father (referenced above) and other sources, the boys are to be executed simply because of political activities by other family members]

Shahla: We are trying to broadcast this message on the internet and at any level we can.

With all of our power, we are on your side. They are like our children, they are our dear ones.

Mother: Because I don’t have access to all the other networks, I request that you let everybody know because tomorrow is too late. I am helpless.

Shahla: You are doing your best.

Mother: I value what you are doing.

Shahla: We will do what we just said – we will put it on every site that we can. I am happy that you came and used this opportunity. I want everybody who is hearing me to gather in front of the prison before dawn. And if you remember anything else you can just call us again and talk.

Translation by PR for Personal Rights 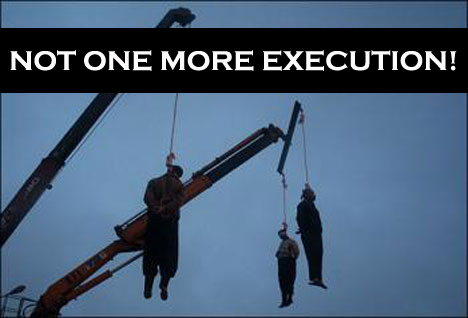 « “Teacher, I Learned Lessons of Life and Liberty from You!” Statement from Mothers of Park Laleh for Teacher’s Day
Reports from People Calling to Isfahan Prison to Stop the Executions of Mohammad and Abdollah Fathi »

7 thoughts on “Interview with Mother of Mohammad and Abdollah Fathi, Two Young Men to Be Executed on 17 May 2011 on Charges of “Moharabeh” (English Translation)”