TAKE ACTION for SHIRKO MOAREFI, Iranian Political Prisoner to be Executed on 1 May 2011 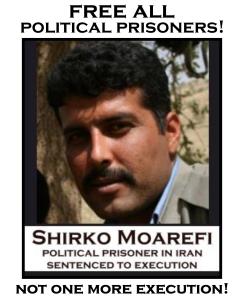 Reliable sources report that the execution date for 31-year-old political prisoner Shirko Moarefi has been set for May 1, International Workers Day. He was arrested on October 31, 2008 and has been detained ever since in the Saqez Intelligence Agency Detention Center and Saqez Prison.

Shirko’s family, writing on his behalf to request assistance from human rights activists to save Shirko’s life, relates that “Shirko was charged with Moharebeh (enmity with God) by the Islamic Republic for his support of an organization [Komeleh] that for years had put aside armed resistance and was only active in cultural activities, and his death sentence was issued after a few minutes in court.”

The Islamic Republic is rapidly executing scores of people inside its prisons. It is critical to demand the immediate and unconditional release of all political prisoners, and call for an immediate halt to executions in Iran.

2) Organize a protest action in support of Shirko; a print-ready graphic (jpg file) has been made for this purpose (click on the image in this post until the maximum size has been reached and then download; you can also download a pdf file of the poster; it is scaled to print at a size of 18″x22″).

3) Send emails to demand the immediate and unconditional release of Shirko and all political prisoners in Iran. A sample letter appears below.

I am writing to you with an urgent request that you issue a demand for the Islamic Republic to immediately and unconditionally release all political prisoners in Iran, including Shirko Moarefi, a 31-year-old political prisoner held in Saqez prison in Iran. He has been severely tortured, and the Islamic Republic regime has now issued orders for his immediate execution.

I fully expect the United Nations to finally take action on this and all other cases of political prisoners in Iran. People of the world do not accept the continued detentions, tortures and executions perpetrated by the Islamic Republic, and we do not tolerate the UN’s refusal to act substantively in these matters.

2 thoughts on “TAKE ACTION for SHIRKO MOAREFI, Iranian Political Prisoner to be Executed on 1 May 2011”