“We did not have a revolution to go back!”: March 8, 2011, International Women’s Day in Solidarity with Women in Iran 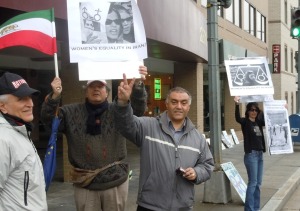 On Sunday, March 6, 2011 Mission Free Iran organized a demonstration in Washington DC to celebrate International Women’s Day in solidarity with Iranian women. We thank all of our friends who came out to support Iranian women’s demands for freedom and equality. This post includes photos of the day’s action, and Mission Free Iran’s statement that was read in front of the Islamic Republic’s offices.

On March 8 1979, Iranian women poured into the streets of Tehran shouting “We did not have a revolution to go back!” Thousands of women that day once again made sure that the world as well as the Islamic counterrevolution understands that Iranian women will not accept anything less than total gender equality. Gender equality was what they wanted, not only for themselves, but for the whole world. They said women’s right to equality “is not Western, nor Eastern, it is Universal.” 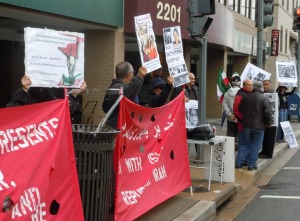 Thirty-two years later, Iranian women are demanding the same right. This time, Iranian women fill the streets of Iran, this time not only as the standard-bearer of the Iranian revolution against barbarity of Islamic regime, but as a major force. Not only radicalizing the demands of the fantastic ongoing international revolutions, from Algeria to China and beyond, but at the same time showing the way to the women of the world, from Somalia to Canada, that absolute equality of sexes is still a battle – not a battle – it is a war yet to be won, and women of the world have a unified interest in winning each and every one of this WAR’s individual, but certainly not isolated battles. After all, equality is not Western, nor Eastern, it is UNIVERSAL.

Thirty-two years since March 8, 1979, Iranian women stand in the forefront of another revolution, a new revolution against tyranny, barbarity and inhumanity. The 21st century’s first WOMEN’s revolution is indicting the world of inequalities.

Isn’t it ironic? Thirty-two years ago, the Islamic counterrevolution broke the spine of our revolution by enforcing the savagery of shari’a, by pinning the submissive Islamic hijab onto the skulls of Iranian women, lashing, raping, hanging and stoning. And this barbarity was neglected, ignored, the plight of Iranian women brushed away by all sorts of outrageous excuses and ridiculous theories by all political tendencies, from the so-called feminists of all shades, to the cultural relativists of different colors, from the pseudo-left of United States to the right of Swedish politics.

Yet today, 32 years later, the same women – women who never, not for a single day, accepted submission to Islamic reaction – are the major force behind a revolution that is about to topple shari’a law, the rule of Islam, not only in Iran, but worldwide. They are the force that is going to break the spine of inequality everywhere: they set the social and political agenda of the revolutionary development that started in Iran of 2009, and, through a unification of the demand for equality and social justice, is connecting Tunisia, to Saudi Arabia, Pakistan to the United Kingdom, unifying the whole revolutionary world against the current systems of governance in all their diversities. Isn’t it IRONIC?

Today, 32 years later, we stand in support and solidarity with Iranian women, these heroes of SOCIAL revolution. The women of the world, your sisters in arms, are with you, closer than ever. Your fight is ours, and together we will win this battle, and our battles in each and every other battlefield, from Afghanistan to South Africa; from Ivory Coast and Congo to the United States.

We have nothing much to lose, but we have a world of humanity, equality, justice, love and happiness for all to win.

« No to Deportation Campaign: Names of Several Iranian Refugees Illegally Deported from Iraq to the Islamic Republic of Iran
Mission Statement of the International Coalition for the Rights of Iranian Refugees »

2 thoughts on ““We did not have a revolution to go back!”: March 8, 2011, International Women’s Day in Solidarity with Women in Iran”