Keith Best, Chief Executive of the Medical Foundation for the Care of Victims of Torture, speaks out on torture in Iran in support of the Campaign to Free Political Prisoners in Iran (CFPPI) campaign, “Be Her Voice! Be His Voice!“: 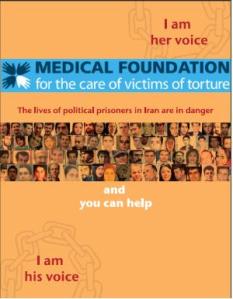 “Hello, I’m Keith Best. I’m the Chief Executive of the Medical Foundation for the Care of Victims of Torture, and in a very real sense, we are the voice of political prisoners in Iran. The greatest number of people from any particular country who come to us as torture survivors are from Iran, where we know from their personal testimony and the experience that they’ve had, and the evidence of the scars and the anguish that they’ve suffered, that they have been hanged up, they have been beaten, they have been whipped, they have been held in solitary confinement. This is a tragedy for them, but it’s also a tragedy for Iran.”

In addition to maintaining our own campaigns for political prisoners in Iran, Mission Free Iran supports the Campaign to Free Political Prisoners in Iran’s Be Her Voice! Be His Voice! Campaign.