Yesterday’s uprising in Iran proved unquestionably that the desire of people in Iran is to dismantle the entirety of the Islamic Republic. Although the day of protests was ostensibly “called” by Mir Hossein Mousavi, an Islamic reformist politician who continues to support a Khomeinist theocracy in Iran, the tens of thousands of Iranian people who came to the streets clearly demonstrated their demand for a secular and democratic form of governance:

Few protesters could be seen to be wearing green, which is the color of Mousavi’s reformist campaign:

Rooftop chants in the night demonstrated that calls that led with the Islamic “Allah-o Akbar” (God is great) earned a mass response of the secular “Marg bar diktator” and “Marg bar Khamenei!” – Down with the dictator! Down with Khamenei! These are expressions of fury that aim directly at the heart of the principle of the Islamic regime, velayat-e faqhih (“clerical rule,” i.e., theocracy):

And as in the uprisings of 2009, people burned images of both Seyed Ali Khamenei and the enormously hated Ruhollah Khomeini in the street:

The clarity of peoples’ demands for an end to the entirety of the Islamic Republic theocracy – not demands for reform, or a fresh vote, or an ouster of Ahmadinejad – was not lost on Mir Hossein Mousavi and his political partner Karroubi.

Mousavi and Karroubi, in a paroxysm of vulgarity, chose to put in the header of their website (kaleme.com) an adulatory image of Ruhollah Khomeini returning to Iran in 1979 to crush the 1979 popular revolution with an Islamist counterrevolution. Note that Mousavi and Karroubi posted the image of Khomeini in the header of their website in the month of January 2011 – a month during which people were being executed by the Islamic Republic regime at a rate of at least 1 person every 8 hours; a crime against humanity which was started by Khomeini and continued through Mousavi’s terms of office up until today.

Below are two screen-captured images of Mousavi and Karroubi’s kalame.com website. The first was captured on February 9, 2011. The image of Ruhollah Khomeini in the header is very clear, as is the image of the Islamic Republic’s flag. The second image was captured on February 15, 2011 – one day after Iranian people went to the streets to tell the world unequivocally that they fundamentally reject the entirety of the Islamic Republic and its velayat-e faqhih. 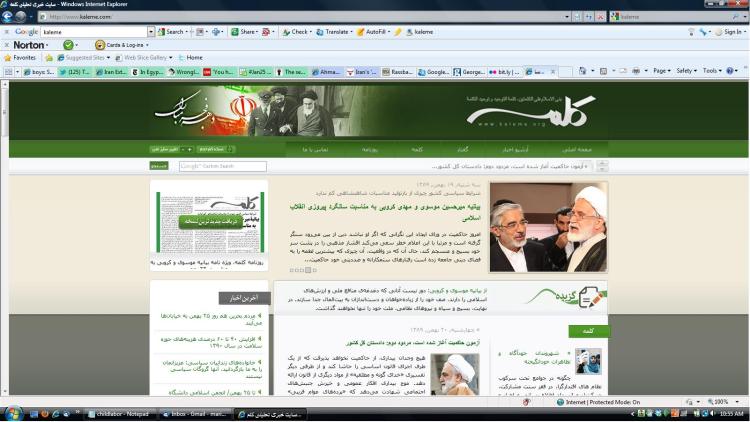 February 9, 2011: Screencapture from the front page of the website of Mousavi and Karroubi, Kaleme.com 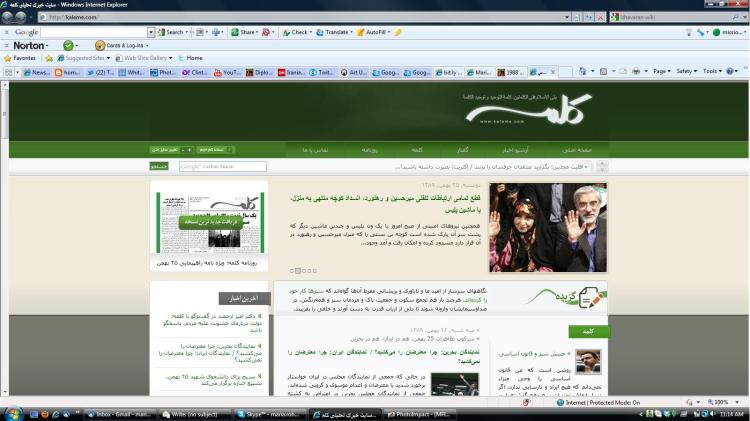 February 15, 2011: Screencapture from the front page of the website of Mousavi and Karroubi, Kaleme.com

However, the removal of Khomeini from his website did not reflect a change of heart but merely political pragmatism: a few hours later, Mousavi published a statement on kaleme.com in which he insisted that “the goal of the Green movement is to revive the values of the Islamic Revolution and Khomeini.”

Our message to Mousavi and Karroubi: you have told the world that you stand for “the Islamic Republic, not a word more, and not a word less.” You have celebrated and genuflected to the author of 32 years of non-stop slaughter of Iranian people on your official website – until it became politically inconvenient to do so. You do not and never have fooled Iranian people. And we are here to make sure that the rest of the world understands clearly what you represent: another 32 years of slaughter of Iranian people.

Iranian people are in the streets today to bring down the Islamic Republic in its entirety, and Mousavi and Karroubi will stand trial in international criminal court shortly thereafter.

For those unfamiliar with the role of Mousavi and Karroubi in the history of the Islamic Republic, the following synopsis is provided:

Mousavi and Karroubi have been part of the Islamic Republic establishment since day one, starting with the execution of anyone who opposed Islamist rule. Mousavi then was one of the founders of the counter-revolutionary organization “Mojahedin e Enghelaab e Eslamii,” which actively organized and encouraged the suppression of students, women, and religious and ethnic minorities.

Mousavi was also the Prime Minister of the Islamic Republic during the mass executions of political prisoners in 1988, and in fact justified the executions in an interview with international media.

Karroubi was the chairman of the Parliament during the Chain Murders of the 1990s and he neither condemned those politically-motivated killings nor took any action to bring those responsible to justice. He was also the chairman of the Parliament during the 18 Tir attacks on student dormitories, during the arrest and torture of dozens of student leaders that followed, and during violent suppressions of revolting masses all over Iran.

The struggle between the “green” Islamists (represented by Mousavi and Karroubi) and the “black” Islamists (represented by Khamenei, Ahmadinejad, the Larijanis, et al.) is nothing more than a struggle for power within the violent theocratic dictatorship known as Islamic Republic. It is a struggle between two Islamic forces in which each one claims to be better-equipped to sustain the entirety of the Islamic Regime.

The struggle of Iranian people, however – the reason you see them in the street risking years of detention, torture, rape and execution – is a struggle for freedom, a secular form of governance, democracy, their fundamental rights as human beings. These are the same people who rose up in 2009 and drew global admiration for their courage in the face of the world’s most depraved and violent criminal regime. These are the same people the world must support in their struggle today. 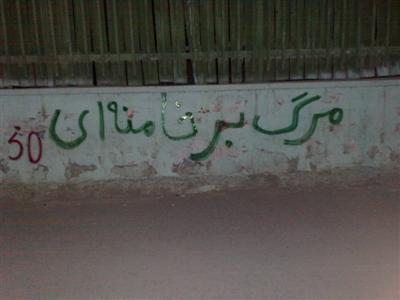