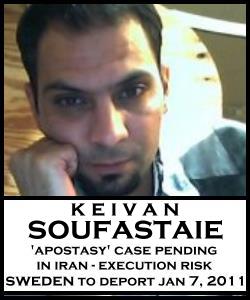 UPDATE, January 5, 2011: Keivan Soufastaie will not be deported from Sweden; his case has been re-opened, and he is allowed to leave the prison. ICRIR and Mission Free Iran thank everyone who spread the word about his case.

About Keivan
Keivan Soufastaie is 35 years old. He keeps a blog, and is interested in reading, religion, and football. He is an older brother to two siblings, a boy and a girl. Keivan is from Iran.

He fled his home country for Sweden in March 2008 because the Islamic Republic’s security forces were looking for him. They wanted to arrest Keivan because in his position as a manager in a factory, he criticized Islam in front of the workers, and evangelized for Christianity. Keivan Soufastaie was to be arrested and detained on charges of apostasy – rejecting Islam. There is now a formally-documented apostasy case pending against him in the Islamic Republic’s court.

Crackdown on Christian “Apostates” in Iran
The world – including the Swedish government – is well-aware that under Shari’a law, which is the law of the land in Iran, the penalty for apostasy is death. The world is aware that the Islamic Republic has recently handed down a death sentence to 35-year-old Christian priest Yousef Nadarkhani, despite the fact that no articles in the Islamic Republic’s legal code refer to such a crime, and the presiding judge based his opinion on texts by Iranian religious scholars. Another Christian pastor, 33-year-old Behrouz Sadegh-Khanjani, is facing a possible indictment for apostasy in the southern city of Shiraz. We have seen the photographic evidence and read the witness statements of the tortures and beatings implemented by agents of the Islamic Republic’s Intelligence Ministry against “Farsi-speaking” Christians in Iran, for example: http://hradns.info/1389-01-27-05-24-07/5942-1.html (caution: some may find the associated photographs disturbing). We know that right now in Iran, there is a violent wave of apostasy-related persecution of Christians that extends even to the Armenian Christian population, who cannot be considered apostates because they were born into Christian families.

Despite the outstanding warrant against Keivan Soufastaie for apostasy, despite the known state-sponsored violence against Christians in Iran, and despite the clear government crackdowns on Christians in Iran in recent months, the government of Sweden has arrested Mr. Soufastaie, and plans to deport him to Iran this Friday, January 7, 2011. The government of Sweden plans to deport a clear case of a person at risk of execution back to Iran, despite the fact that this is a clear violation of Article 3 (prohibition of inhuman and degrading treatment and torture) of the European Convention on Human Rights, and despite the fact that the Strasbourg Court has already found against Sweden when it tried to deport another asylum-seeker at risk of torture back to Iran (Chamber judgment, R. c. v. Sweden (application no. 41827/07)). Nevertheless, Keivan Soufastaie is currently sitting in a detention center in Solna awaiting deportation in just a few days.

Keivan’s Experience in Swedish Court
The first and only hearing of Keivan’s asylum case in Sweden took place at a mid-level court in December of 2008; his case for asylum was rejected. A rejection decision was also handed down from a higher court in November of 2009.

Keivan had only 2 meetings with the lawyer before his hearing in Swedish court, and no suggestions were made to him about how to conduct the interview. The lawyer in his case asked only one question of Keivan, and that was whether there was any documentation to support his assertion that he was a Christian fleeing religious persecution in Iran. During the hearing, as he was responding to questions regarding religious figures in the Christian Bible, he noticed that the translator was unable to translate his responses to the court. When Keivan pointed out this problem, the court told him that the translator had convinced them that although Keivan’s answers to the questions central to his asylum case were not being translated, it had no bearing on his case. This is a clear indication that Keivan’s right to a fair hearing were shamelessly abrogated.

Sweden’s Unjustifiable Reasons for Rejecting Keivan Soufastaie’s Application for Asylum
Sweden gave Keivan several outrageous and unjustifiable reasons for rejecting his case. But among the saddest relates to the fact that when Keivan arrived in Sweden, he found Christian fellowship among Jehovah’s Witnesses instead of among those of his own religious denomination.

When Keivan came to Sweden, he was sent to live in an asylum-seeker’s camp in a village. Because of the secular nature of Swedish society, the church in the village was inactive, and there were days if not weeks between church services. While he was in the asylum-seekers’ camp, he came into contact with people from Jehovah’s Witnesses. He had the chance to discuss religion for the first time since he had fled Iran, which helped to dispel the loneliness and isolation he felt as a refugee in Sweden. He became friends with the Jehovah’s Witnesses, and from them he received leaflets in Farsi so that he could read about Jesus Christ – something very important to him as someone who evangelized for Christ while in Iran. He also participated in the Jehovah’s Witness services in other cities; it was through them that he had the opportunity to discuss his Christian faith, which is clearly a central part of his life.

Yet this friendship that he developed with the Jehovah’s Witnesses was used by the Swedish courts to reject his asylum application. They argued, “If you are really an Christian evangelist, how can you go to a Jehovah’s Witness church?” The Swedish courts apparently ignore the social needs of human nature, especially in the kind of situation imposed on an asylum-seeker.

Other reasons that the Swedish courts gave for rejection of Keivan’s asylum application include the following:

– They said that the arrest of Keivan’s brother instead of Keivan himself did not indicate that Keivan was at any personal risk should he return to Iran. They stated, “How is it possible for the Islamic Republic to arrest your brother if it was really you that they were after?” But the Swedish government knows exactly how it is possible for the Islamic Republic to do this. The entire world is well-aware of the usual brutal and criminal tactics of the Islamic Republic. It is not through accident or ignorance that the Swedish government has rejected a clear-cut asylum case, but if so we refer the interview personnel and the immigration court officials to one of many articles regarding the case of Sakineh Ashtiani’s son Sajjad, or on the arrest and detention of the wife and family members of Mohammad Mostafaei, Ashtiani’s former lawyer. The latest coverage of these cases can easily be read in Aftonbladet!

– They told Keivan, “If you were under persecution, and if security forces were after you, how could you leave the country so easily?” First, this argument is not grounds on which to reject an asylum-seekers’ case. Second, Keivan did not leave the country easily – he simply left as quickly as he could, before the Islamic Republic could blacklist him and prevent him from leaving the country. From the moment that he knew the regime was after him until the day that he sought asylum in Sweden was only 25 days – too short a period of time to get through the regime’s bureaucracy. If the Swedish immigration courts and officials need to know that such inefficiency on the part of security officials is indeed possible, we will gladly provide them with Swedish cases.

In addition to the documented apostasy case pending against him in Iran, Keivan Soufastaei is also a documented member of the organization Ex-Muslims in Sweden, and through his membership he has, in an organized manner, fought against political Islam and the Islamic regime in Iran. The immigration office is certainly aware of the fact that membership in an organization like Ex-Muslims stamps Keivan as a Mohareb (combatant against God), a crime which, according to Islamic laws in Iran, is punished by death. Four people were hung in the Iranian city of Zahedan alone on January 1st of this year on charges of Mohareb. The Islamic Republic is daily handing out death sentences to political prisoners in Iran on charges of Mohareb.

There is no doubt that Keivan Soufastaie is in danger of execution if he is returned to Iran. It is thus clearly illegal to deport him to Iran under jus cogens international law that demands non-refoulement in such cases.

The Demands of the International Coalition for the Rights of Iranian Refugees
1) We demand that Keivan Soufastaie be granted his clearly-deserved refugee status. He is a documented execution risk. The fact that Sweden plans to deport a documented execution risk to the Islamic Republic of Iran, in contradiction to legislation prohibiting refoulement to Iran, serves as a glaring red flag: what is Sweden doing with cases that are not so clearly documented – people who have equal and justified fear of persecution, torture, execution, and yet do not have the same documentation that Keivan Soufastaie has?

2) The Swedish government needs to send out a memo to immigration staff on the current situation in Iran – immediately – and stop persecuting the persecuted. Sweden is a country with values based on human dignity and human rights. Swedish immigration authorities need to start acting like it.

3) The Swedish government should stand by the findings of the European Court of Human Rights: stop threatening to deport Iranians, and in fact go one step further to grant Iranians prima facie status based on the clear and objective crisis-level human rights situation in Iran. Sweden should also take responsibility for initiating legislation in the UN to give prima facie status to Iranian asylum-seekers.

6 thoughts on “ICRIR PRESS RELEASE: Sweden to Send Christian “Apostate” Back to Iran – to Imprisonment, Torture, and Possible Execution”