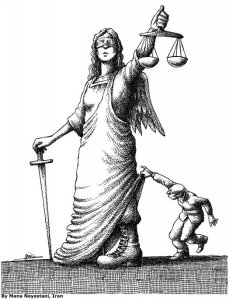 On the 9th of December – the International Day of the Endangered Lawyer – the Associaton of European Democratic Lawyers – a coalition of 9 different lawyers’ associations in Europe – will protest in front of the embassies of the Islamic Republic of Iran in 6 European countries. The situation of lawyers under the Islamic Republic, always dangerous, has now reached crisis level, with numerous lawyers representing human rights cases having been systematically arrested, detained, and put under torture over the last several months, including Houtan Kian, the lawyer for Sakineh Mohammadi Ashtiani; Nasrine Sotoudeh, the lawyer for numerous human rights cases; Mohammad Olyaeifard; and many others (letter-writing action to support lawyers in Iran).

This action lays the groundwork for long-term impacts in fighting injustice not only in Iran but elsewhere. It takes the humane and justice-seeking world one step closer to indicting the responsible parties of the Islamic Republic for genocide and crimes against humanity, a case for which the basis has been amply laid out in a report on a legal analysis by Geoffrey Robertson, first President and Appeal Judge in the UN War Crimes Court in Sierra Leone and appointed by the UN Secretary-General as a distinguished jurist of the UN Internal Justice Council, discussed here.

The demands of the Association of European Democratic Lawyers made in support of Iranian lawyers, addressed to Mahmud Ahmadinejad, include the following:

-The immediate release and replacement in their duties as defenders to all colleagues who suffer persecution related with the exercise
of their profession.

-A full and free exercise of their independent advocacy role.

-Iran Bar Association activities must be allowed without any limitations.

-Lawyers must be able to communicate freely and without restrictions with their clients and to have free access to court
records concerning their detention.

-To provide all Iranian lawyers with the freedom that their profession requires and to ensure – for the future – in Iran – the
implementation of the abovementioned international standards as the Basic Principles on the Role of Lawyers.

The European Democratic Lawyers have also called for a fact-finding mission to Iran. A copy of their complete letter appears below.

View this document on Scribd

Mission Free Iran supports and applauds this action, and we encourage lawyers and lawyers’ associations worldwide to support the action with a demonstration in their respective capitals, or by issuing a public letter of support for the action of December 9.

European Democratic Lawyers is an organization that aims to “promote the respect of the rights of the defense and in particular to preserve the physical integrity as well as the political and economic freedom of lawyers” and works especially to support “those who are in precarious situations and those whose basic rights are not recognized or hardly acknowledged.”

Mission Free Iran thanks the International Committees against Stoning and Execution for disseminating this important announcement.