April 1980: Hezbollah gangs and Basijis attack Tehran University students during the Regime’s “Cultural Revolution” while students resist inside the University.

16 Ãzar is a day of celebration: a day of celebrating the precious memory of Iranian students: all those fallen, jailed, beaten and brutalized, yet who, in the darkest nights of the brutality and oppression, kept alive the torch of hope and conviction for a better world.

16 Ãzar is: The day of renewal of our promise to our children, that they may live in a society worthy of human beings!

16 Ãzar is: The day for the manifestation of one planet and one race – the human race!

16 Ãzar is: The day of people’s rage against oppression and criminal regimes!

16 Ãzar is: The day of society’s indictment against tyranny.

16 Ãzar is: The day of a humane revolution for a humane society and a Humane Republic.

16 Ãzar is: The day of strengthening our unbreakable commitment to the eradication of poverty, misery and human suffering.

16 Ãzar is: Resistance against the nightmare of the Islamic Republic and all oppressors of Iranian people. 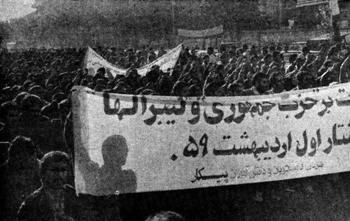 21 April 1981: This is a demonstration organized by Paykar Organization (one of the most radical left organizations at the time in Iran) in annual memorial of the crushing of the students’ movement a year earlier. They are going towards Revolution Square. The slogan on the banner implies “Shame and Disgust on all factions of Islamic Republic.” As the picture shows, both sides of the street were full with demonstrators. The demonstration was formed without any call, just to prevent an attack from Hezbollah. Hezbollah were shocked and could not prevent the demonstration. 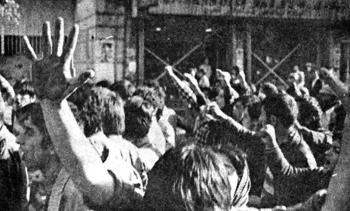 April 1981: This is another picture from the memorial demonstration, a year after the student massacre, on April 1981 in front of the Tehran University. This is just a few minutes after a grenade was thrown into the middle of the demonstration. One of the demonstrators is showing his bloody hand to people to expose the regime’s crime. The demonstration continued for two days without stop toward Hezar Taxtexabi hospital till they could free all wounded taken to that hospital.

Taken from our original site, Voices of Children in Iran.