MFI Press Release: Human Rights Activists Demand UN Resolution to Criminalize Stoning and the Expulsion of the Islamic Republic of Iran and All Anti-Woman Regimes from the UN’s Women’s Organizations 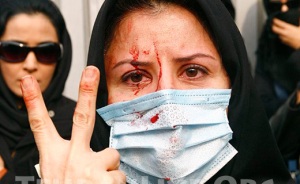 On December 11, human rights activists will protest at UN Headquarters in New York City, and in Los Angeles, London, and Berlin, to condemn the UN’s placement of gender apartheidist Islamic Republic of Iran and other regimes that rely on violence against women to implement their domestic policy on UN organizations tasked with working for women’s equality and empowerment. We will demand the removal of these regimes from those UN organizations, starting with a demand for immediate removal of the Islamic Republic from the UN Commission on the Status of Women. We will also demand the passage of a UN resolution criminalizing the practice of stoning worldwide.

Washington D.C. November 18, 2010 — Women worldwide reject the practice by the United Nations and its constituent governments of allowing gender apartheid and anti-woman governments to sit on internationally-legitimized bodies tasked with developing global policy on gender equality and women’s empowerment.

Nowhere is the UN’s animosity towards women more clear than its refusal to condemn the stoning sentence of Sakineh Mohammadi Ashtiani, while at the same time allowing some of the world’s worst abusers of women and their champion, the Islamic Republic of Iran, to sit on the UN Commission on the Status of Women and/or the new UN Women Board. Some of the virulently misogynist governments that the UN has welcomed to sit on one or both of these organizations, apart from the Islamic Republic of Iran, include Saudi Arabia and the Democratic Republic of the Congo.

At the United Nations Headquarters in New York City, 100 women wrapped in white shrouds spotted with blood will hold a mock-stoning sit-in protest at noon on December 11, 2010. Women and men striving for equality and justice will protest against the United Nations and its constituent governments, and demand an end to their refusal to act to address violence and other crimes against women. We start with the demand to pass a UN resolution criminalizing the practice of stoning worldwide, whether implemented by state or non-state actors. We will condemn the UN’s placement of gender apartheidist regimes, and regimes that rely on violence against women to implement their domestic policy, on UN organizations tasked with working for women’s equality and empowerment, and we will demand their removal from those organizations. On December 11 we will demand the immediate removal of the Islamic Republic of Iran as the flagship of misogynist states.

We do not allow the legitimation by the UN of the Islamic Republic, a governments that stones women to death, or the Democratic Republic of Congo, which uses rape of thousands of women as part and parcel of domestic policy. Such entities are criminal, they should be treated as such, and honorable people around the world will continue to make this demand until it is achieved.

We welcome the public to participate in the events of December 11, and we especially encourage participants from countries where stoning and rape are practiced by the government to join us in front of the United Nations on December 11 to make their voices heard.

« American Feminist Organizations Begin to Demonstrate Support for Iranian Women
Full Text of the UN General Assembly Resolution on the Situation of Human Rights in the Islamic Republic of Iran, Passed November 18 »