Since the summer of 2009, Mission Free Iran has repeatedly attempted to find support for Iranian women’s struggle among feminist organizations, which should be natural allies for Iranian women fighting for equality under a dictatorial and gender apartheidist regime. Iranian women distinguished themselves on the front lines of the uprising in Iran in the latter half of 2009. We have seen the Islamic Republic intensify its crackdown against women ever since, from aggressively enforcing “bad hijab” with assaults on the streets for showing an ankle and outrageous fines for wearing nail polish and lipstick, to targeting female human rights lawyers for arrest and detention, to pressing for stoning executions of Sakineh Ashtiani, Maryam Ghorbanzadeh, Azar Bagheri, and 20 others, most of whom are women. Based on Shari’a law, the Islamic Republic has enshrined into its penal code and constitution provisions that are fundamentally anti-woman: a woman’s life is valued as half that of a man, the rape of the girl child is legalized in the name of marriage (it is legal for girls to be married at age 9), and women have few rights in terms of marriage or divorce, while the rights they do have are constantly threatened. Women have no right even to choose their own clothing in the morning – they are forced to wear compulsory hijab whether they want to or not.

The struggle of Iranian women that erupted into visibility in 2009 should have been a clarion call for feminists and feminist organizations worldwide to stand in solidarity with women in Iran from June 2009 forward. From the start, it has been a woman’s revolution. However, Western feminists, and especially American feminist organizations, largely refrained from becoming active in support of the struggle of Iranian women. Even when the Islamic Republic was given a seat on the UN’s Commission on the Status of Women at the end of April 2010, giving it a voice in determining global policy recommendations on gender equality and empowerment for women in all countries, no feminist organizations spoke up to condemn the selection of the misogynist regime.

In the aftermath of the Islamic Republic’s ascension to the UN Commission on the Status of Women, Mission Free Iran renewed its outreach to feminist organizations, sending repeated requests to the National Organization of Women, Feminist Majority, and Code Pink, via email, phone call, Twitter and Facebook, asking them to take a position on the Islamic Republic vis-a-vis its abject violence against women, and its absurd legitimation by the UN Commission on the Status of Women. None of our overtures to these organizations received any response.

By July 2010, the case of Sakineh Ashtiani had drawn international condemnation for the absurd sentence of death for the so-called crime of adultery by the barbaric method of stoning execution. Sakineh’s case drew particular attention from feminists, and more organizations became active in support of Sakineh Ashtiani, and Iranian women’s struggle more generally.

Equality Now was the first feminist organization to condemn the stoning of Sakineh Mohammadi Ashtiani, issuing an alert in the last few days of June, almost as soon as the campaign was announced.

We later received a copy of a letter (pdf) that Radical Women sent to the Islamic Republic on October 18, 2010, demanding 1) the immediate and unconditional release of Sajjad Ghaderzadeh, Houtan Kian, and the two detained journalists, 2) the revocation of the stoning or execution sentence of Sakineh Mohamadi Ashtiani while granting her immediate and unconditional freedom, and 3) respect for the human rights of women in Iran. 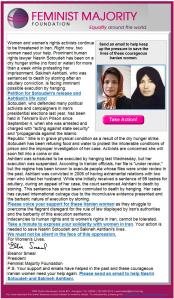 Finally, on November 3, 2010, one of our members received an emailed action alert from Feminist Majority (click on image to see their alert), asking its membership to take action in support of lawyer Nasrine Sotoudeh and Sakineh Ashtiani. Although the Feminist Majority website does not yet have this action alert posted on its website, we appreciate that Feminist Majority is finally taking action on behalf of both Nasrine and Sakineh, and hope that they will expand their efforts in support of all Iranian women. Previously, Feminist Majority had only supported Islamist activists like Shirin Ebadi (1) and the 100 Million Signatures campaign, both of which support the continuation of the gender-apartheidist Islamic Republic and are therefore fundamentally anti-woman in nature. Feminism demands nothing less than gender equality.

We also point out that the National Organization of Women remains silent on the struggle of Iranian women, and worse, that Code Pink has long been an active supporter of Mahmoud Ahmadinejad and the Islamic Republic, most recently during Ahmadinejad’s visit to New York City to capitalize on the United Nation’s continued willingness to legitimize the genocidal regime that he represents.

Mission Free Iran thanks American feminist organizations Equality Now, Radical Women, and Feminist Majority for coming out in support of Sakineh Ashtiani and other women facing persecution by the Islamic Republic. We invite them to join us on December 11 to demand a UN resolution to criminalize stoning worldwide, and to demand removal from the UN’s women’s organizations of states that depend on misogynist policy and practice to maintain political power. We hope that they continue to work in solidarity with all women in Iran throughout the crisis they are facing, and make the same demand of gender equality for our sisters in Iran as we demand for our sisters in Western countries. Freedom, justice, and equality are neither East nor West – they are universal.

Footnote:
(1) Shirin Ebadi’s support for human rights is very limited. She only recognizes certain (Muslim, reformist) political prisoners as worthy of her support and advocacy, and does not see the Islamic Republic’s slaughter of thousands of prisoners – regardless of the given reason for their execution – as a symptom of the fundamental incompatibility of a theocratic regime with universal human rights. Shirin Ebadi believes that an Islamic theocracy can somehow be made compatible with the principles of human rights. But Shari’a law is fundamentally antithetical to the most basic principles of human rights: equality of the sexes.

« Ukrainian Activist Group FEMEN Keeps the Pressure on for Sakineh with Repeated Protests against the Islamic Republic in Kiev
MFI Press Release: Human Rights Activists Demand UN Resolution to Criminalize Stoning and the Expulsion of the Islamic Republic of Iran and All Anti-Woman Regimes from the UN’s Women’s Organizations »