September 23: Join the Day of Action in NYC to Demand Freedom in Iran & Stand against the Brutality of the Islamic Republic

Join Mission Free Iran for a day of action in New York City on the occasion of the UN General Assembly meeting, at which the Islamic regime will pretend once again to represent Iranian people! 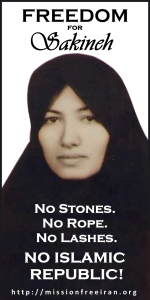 Look for this banner to find Mission Free Iran in NYC

We therefore have planned a day of action in New York City to raise awareness about the situation facing people in Iran, to loudly condemn Ahmadinejad himself for having the audacity to show his face at the UN General Assembly, and to condemn the United Nations for their reprehensible silence on 31 years of atrocties in Iran.

Agenda for the day:

12:30: Dag Hammarskjold Plaza (47th Ave and 1st, in front of the UN gates) – protest the UN and Ahmadinejad’s presence there throughout the afternoon.

We hope to see you out there at any or all of these activities!

« Standing with Iranian People, and with the Sheikh Jarrah Campaign against Israeli Government Occupation and War [FA]
Mission Free Iran’s Statement at the September 23 Protests on the Occasion of the UN General Assembly Meeting in New York City: THE ISLAMIC REPUBLIC IS THE MURDERER OF PEOPLE IN IRAN, NOT THE REPRESENTATIVE OF PEOPLE IN IRAN »