Event Report: September 18, 2010: Protest against Attendance of the Islamic Republic at the 2010 UN General Assembly 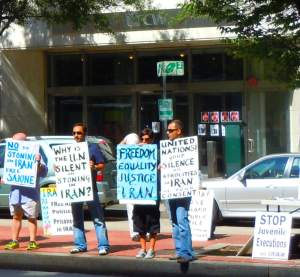 September 18 protest against attendance of the Islamic regime at the UN General Assembly; note photos of Sakineh & Ahmadinejad on the front of the UN building behind the demonstrators

In coordination with 35 other cities around the world, the Washington DC community demonstrated on September 18 outside of the United Nations Information Center (1775 K St NW). The protest condemned the Islamic Republic and its reliance on stoning and flogging to maintain power in Iran. But the primary target of the day’s demonstration was the United Nations, which has been reprehensibly silent on atrocities against Iranian people for the past 31 years, and which intends to allow Mahmoud Ahmadinejad to stand behind a podium at the UN General Assembly meeting next week and perpetuate the abominable falsehood that the bloody Islamic regime represents people in Iran.

It was a beautiful day, sunny but not too warm. We were very happy to welcome several new friends who joined the regular group of demonstrators. It was a multi-ethnic, multi-ideological group raising our voices together to demand human rights for people in Iran, and to condemn the brutality of the Islamic regime in Iran. We opened the day’s action by thanking everyone for coming out, and reviewing the agenda for the event, which was organized by Mission Free Iran. A reporter from Voice of America covered the protest.

We noted that we were targeting the United Nations for its tacit support of torture and genocide in Iran, and referenced documented evidence that the United Nations knew about the ongoing genocidal executions in Iran in the 1980s and stayed silent. This information has recently been published in Geoffrey Robertson’s legal assessment of the 1988 Mass Executions of Political Prisoners in Iran. We declared that the United Nations should not continue to legitimize the Islamic regime of stoning and lashing by allowing its representative, Ahmadinejad, to stand behind a podium at its annual General Assembly meeting and pretend to represent Iranian people. 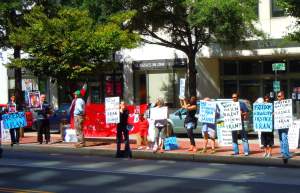 We then immediately launched into chants that included the following:
“United Nations, what are you for? You welcome butchers through your front door!”
“The Islamic Republic does not represent Iranian people!”
“Arrest Ahmadinejad in New York!”
“Down with Islamic Republic in Iran!”
“Down with Khamenei”
“Stop the killing! Stop the violence! Peoples’ voices won’t be silenced!”
“Free the Baha’i!”
“Stop stoning in Iran! No to lashes in Iran!”
“Asylum! Protection! No forced return! These are the rights of a refugee! United Nations, uphold their rights!”
“United Nations! Stop supporting stoning in Iran!”
“United Nations! Stop supporting genocide in Iran!”
“Zendani-ye siasi azad bayad gardad!” (“Free all political prisoners in Iran!”)
“Free all political prisoners in Iran!”
“1-2-3-4 Dictator! Out the door! 5-6-7-8 No more torture! No more rape!”

Saeed Salehinia, of the Worker-communist Party of Iran, brought images of Sakineh Ashtiani and of Ahmadinejad’s face encircled in red with a red line struck through the center. Several of these images were taped to the UN building near the front door as a reminder to the UN that the world is watching as they support the Islamic regime by handing them a seat on the UN Commission on the Status of Women and giving the regime a podium at the General Assemby, while at the same time the UN refuses to condemn the stoning of Sakineh Mohammadi Ashtiani, refuses to condemn the ongoing atrocities in Iran, and refuses to ensure that the rights of Iranian asylum seekers are upheld – and instead abandond tens of thousands of asylum-seekers clinging to survival in squalor and poverty in Turkey, Iraq, Greece, and elsewhere.

Attendees also signed petitions that demanded freedom for Ashtiani and demanded that the Islamic regime not be allowed to represent the Iranian people at the UN General Assembly; several of the petitions were left at the UN offices in Washington DC.

Although the area where the demonstration took place was a business district, and therefore there was not a great deal of foot traffic, we were close enough to some of the national monuments to attract the attention of tourists and locals alike, many of whom took photos of the protest.

After the protest ended successfully and everyone had left, I was preparing to pack the last sign into the car when a worker from the construction site adjacent to the protest site approached and asked what our demonstration had been about. He listened to the story of Sakineh with great interest, was appalled when I described to him what it means to be stoned to death, and wanted to know what we planned to do in New York City to make Ahmadinejad feel unwelcome. He expressed his support for the struggle of people in Iran, and he wished us the best of luck. Then went back to where his colleagues were waiting, and told them the story of Sakineh.

In closing, I would like to thank everyone who joined us on September 18 – it was a pleasure to spend that time with all of you in support of those seeking freedom in Iran. 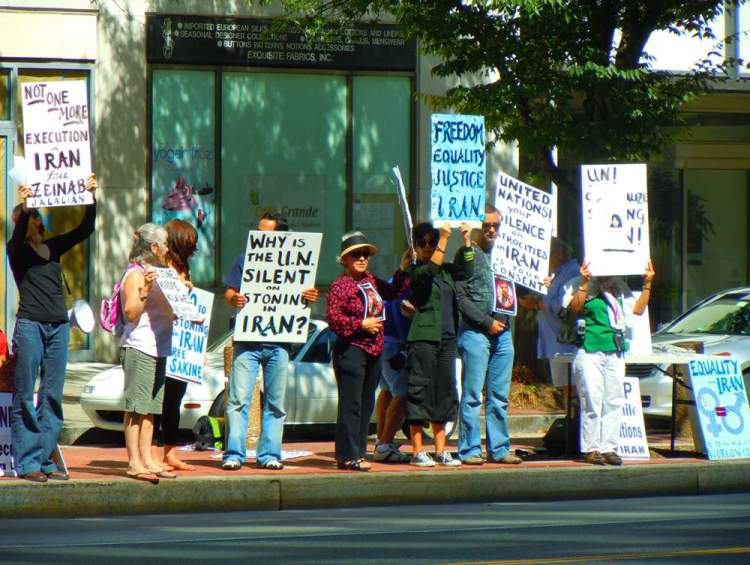 All photos courtesy of PR for Personal Rights.

« ICAE Press Release #72: In Response to Ahmadinejad’s Falsehoods about the Sakineh Ashtiani Case, Sajjad, Sakineh’s son, Challenges Ahmadinejad to a Debate on ABC [ENG | FA | FR]
Standing with Iranian People, and with the Sheikh Jarrah Campaign against Israeli Government Occupation and War [FA] »

3 thoughts on “Event Report: September 18, 2010: Protest against Attendance of the Islamic Republic at the 2010 UN General Assembly”