No IRI at UN

Next Steps in Campaign to Free Sakineh and End Political Imprisonment, Torture and Execution in Iran 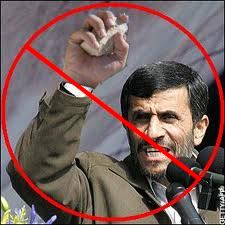 One of the immediate objectives of the ongoing campaign to free Sakineh Ashtiani and end political imprisonment, torture, and execution in Iran, as declared in the resolutions of the 100 Cities against Stoning protests, is to demand that Mahmood Ahmadinejad, the president of the regime of stoning, be prevented from entering the General Assembly of the United Nations in September 2010.

A regime that relies on stoning and execution to maintain power in the country should not be recognized as a legitimate government on the world stage by organizations such as the UN and its constituent governments.

1. LETTER-WRITING: US RESIDENTS: Write to Your Senators & Congresspeople to Demand That Ahmadinejad Be Refused Entry to the United States for the Sept 2010 UN General Assembly in New York City.

2. LETTER-WRITING: PEOPLE IN ALL COUNTRIES: Write to UN and to Your Foreign Minister/Secretary of State to Demand that Ahmadinejad be Barred from UN General Assembly Meeting

3. PROTEST DEMONSTRATIONS.
A. Mission Free Iran will organize activities in New York City on September 23. The first demonstration of the day will be a flash mob in Times Square at around 8 am; information on the second demonstration will be available here shortly. Iranians AND NON-IRANIANS should participate. We will have brief organizational meetings after both morning and afternoon actions for those interested in building an international movement to demand freedom, equality and human rights in Iran with dimensions similar to those of the 1980s movement against the apartheidist regime in South Africa.

B. We encourage people in other cities throughout the world to hold a small demonstration to demand that their government and the UN cease to recognize the Islamic Republic as the legitimate government of people in Iran.

« PEOPLE IN ALL COUNTRIES: Write to UN and to Your Foreign Minister/Secretary of State to Demand that Ahmadinejad be Barred from UN General Assembly Meeting
September 3, 2010: Washington DC Demonstration in Support of Shiva Nazar Ahari and Political Prisoners in Iran »