On 15 August 2010, Mission Free Iran organized a protest against the Greek government’s abuse of Iranian asylum-seekers. Greece’s abuse of asylum-seekers is not limited to Iranians fleeing a murderous regime; according to Amnesty International, of over 30,000 asylum applications examined in 2009, only 36 were granted refugee protection status. During the protest, the Greek government was reminded of their black refugee history in recent years, which includes proven videotaped beatings, verbal mishandling of asylum-seekers, and secret forced deportations across the Evros River and into Turkey.

The Greek government, in its cooperation with the Islamic Republic in Iran, is showing its true face clearly; abuse of Iranian asylum-seekers is tantamount to aiding a barbaric regime like Iran. We in the international community do not tolerate cooperation with the Islamc regime in Iran, which has been responsible for the mass slaughter of thousands of Iranian political prisoners in the ’80s, and whose practice of arbitrary detention, torture, rape and execution of people in Iran continues unabated to this day.

Rather than cooperating with the criminals of the Islamic Republic, the Greek government should instead put its ear to the ground to hear what is coming their way. People around the world showed the power of their voices in the case of Jamal Saberi – the power of the international humane community. Greece should expect protest worldwide, and in fact we understand that tomorrow, August 16, the Greek embassy in Germany will also receive the same message delivered in person (Facebook Event Announcement). Our message is clear: we will not abandon our brothers and sisters.

The Greek government has brought shame upon the honourable Greek community all over the world by cooperating with the savage criminals of the Islamic Republic in Iran. 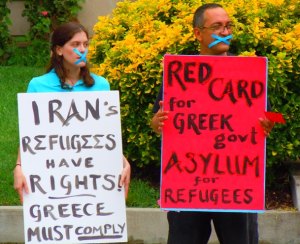 Our chants and signs demanded the recognition of the human rights of asylum seekers, Iranian and non-Iranian. We criticized the Greek government’s broken immigration system, which it attempts to administer through the use of “red cards” that give asylum seekers legal status for a period of 6 months at a time. We think it is more appropriate to give the Greek government a “red card” – the most severe penalty that can be applied in the game of football/soccer for abusive and violent behavior on the field – and we demanded rights for refugees, instead of red cards. We shouted “Red card for the Greek government! Asylum for refugees!” Protesters also used blue ribbon to tape their mouths shut, symbolizing the way that Greece silences asylum seekers by arresting and imprisoning them in detention centers that are in such poor condition that keeping people there constitutes inhuman and degrading treatment.

Voice of America came out to film the protest and conduct several interviews. We also handed out flyers about the Greek government’s abuse of Iranian asylum-seekers to interested passers-by. To close the action, we left the following on the Embassy doorstep: one of our flyers, a red card that said “Red card for the Greek government, Asylum for Iranian refugees!” and a note that we signed demanding that Greece comply with standards of human rights for asylum-seekers.

The stand against brutal dictators and the governments that support them was also ongoing across the street, as protesters were calling for arrest of the president of Sudan.

All photos courtesy of PR for Personal Rights