Event Reports, Not One More Execution, Solidarity with Women

Tbilisi Joined the Global Protest Against a New Round of Executions in Iran | 5 August, 2010 Tbilisi, Georgia 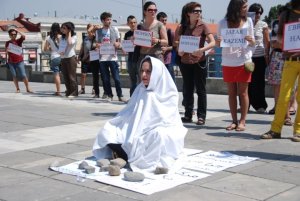 Report submitted by Tiko Japaridze, co-organizer of the Tbilisi protests

In the open letter, protesters address the government of Georgia with a demand for putting pressure on IRI to stop stoning, death executions, torturing and persecutions of people, especially women and children, in Iran. The protesters intend to upload the open letter on various websites and collect even more signatures for sending to the above mentioned authorities.

As for the format of the protest, which lasted for 25 minutes, it had the shape of people lined up waiting for the execution of their death penalties. The central figure was a symbol of a woman to be stoned, wrapped in a white blanket and sitting on the ground surrounded by stones. Behind her, there was a sign saying ‘Death Row’ followed by protesters holding nametags of those people who are facing an imminent risk of executions in Iran. Some of the participants were also holding signs with the slogans condemning death executions in Iran and expressing solidarity to Iranian people.

Noteworthy, the number of female and male protesters was equal, which was a very pleasant fact for the participants of the demonstration since it emphasized the universality of the discontent against the violation of one of the most basic rights of humans – the right to life.

The organizers of the action as well as its participants hope that the reaction of Georgian government will be prompt and appropriate.

« AGENDA for WASHINGTON DC August 5 Protest Against A New Round of Executions in Iran & in Support of Kazemi, Ashtiani, Jalalian and Others at Imminent Risk of Execution
ICAE: Iran stoning case, Sakineh Mohammadi Ashtiani is at imminent risk of execution in Tabriz prison. »

6 thoughts on “Tbilisi Joined the Global Protest Against a New Round of Executions in Iran | 5 August, 2010 Tbilisi, Georgia”