Not One More Execution, Protest Announcements

Slogans and Chants for International Demonstrations Against Execution and Torture in Iran, August 5-8, 2010 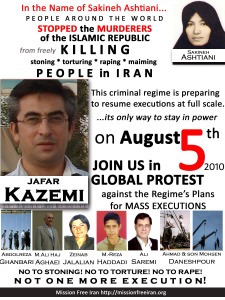 1) Fundamental demands, e.g.:
“No to Torture and Execution in Iran!”
“No to Stoning in Iran!”
“Free Political Prisoners in Iran!”
“Freedom for Jafar Kazemi!” (or Zeinab Jalalian, or Ali Saremi… etc.)

– Stop legitimizing the regime, e.g.,
— OBAMA! Stop Extending Your Hand to Mass Murderers!” ( People can make the same message relevant to their own country’s situation.)

Chants: These are very generic; please come up with additional, more creative ones that are tailored to the event. Most of these are in English.

What do we want? Freedom! When do we want it? Now!

The people, united, will never be defeated!

United Nations, what are you for? You’ve welcomed butchers at your front door!

Stop the torture! Stop the lies! No one else, needs to die!

Together we stand, together we fight! We demand human rights!

« ICAE Press Release No33: Tabriz Prosecution Demands Ms. Ashtiani’s Execution – Tehran High Court Considers
AGENDA for WASHINGTON DC August 5 Protest Against A New Round of Executions in Iran & in Support of Kazemi, Ashtiani, Jalalian and Others at Imminent Risk of Execution »

4 thoughts on “Slogans and Chants for International Demonstrations Against Execution and Torture in Iran, August 5-8, 2010”