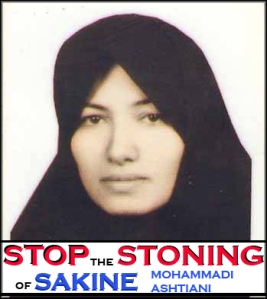 JOIN A PROTEST OR HOLD YOUR OWN

LONDON, England: Saturday July 10, 2pm Trafalgar Square: Caravan through London against stoning in Iran. We will be meeting at 2pm on Trafalgar Square to do a stone-in act and then move towards other points in London staging more stone-in acts to raise awareness of Sakine’s sentence. Contact: iransolidarityuk@gmail.com or call 07507978745.

BEVERLY HILLS CALIFORNIA, United States: Sunday July 11, 12pm-3pm on the north side of Santa Monica Blvd and Beverly Drive on the side with the grass and park. Contact: Ann Marie Lynch, cell: 631-974-8480, amhoney22@yahoo.com.

SYDNEY, Australia: CAN NO LONGER CONFIRM

WASHINGTON DC, United States: Sunday July 11, 12pm-1:30pm outside Islamic Republic’s Interests Section of the Pakistani Embassy (2209 Wisconsin Ave NW) to protest against stoning and execution and in remembrance of 18 Tir. We will then move to the Lincoln Memorial for a 2pm protest against ideas propagated by Hizb ut-Tahrir America, the American branch of a multinational organization that promotes the practice of stoning generally and promotes the practice of stoning specifically as a solution to the global AIDS epidemic. (blog post | Facebook event). Organized by WPI, REAL Courage and Mission Free Iran.

CAMBRIDGE, Mass, United States: Protest on the weekend of 17-18; details forthcoimng; will be held in Harvard Square

« Washington DC Stands Up Against Stoning on July 11, International Day Against Stoning
PHOTO of the DAY: Amber Fryer – IRAN: UPGRADE YOUR LOVE & KINDNESS! »