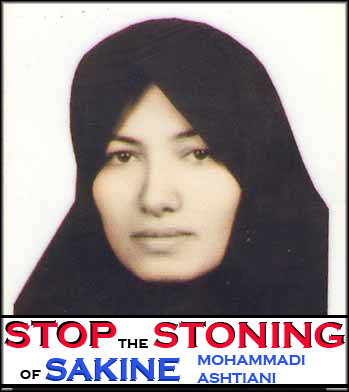 The children of Sakine Mohammadi Ashtiani have reached out to the world with a heart-rending appeal: Protest against our mother’s stoning!

Mission Free Iran is organizing Washington DC’s participation in the global protest to respond to the appeal of Sakine’s children and demand a stop to the barbaric execution of Sakine by stoning.

We will meet in front of the Islamic Republic’s Interests Section of the Pakistani Embassy at 6pm on Friday, July 2, 2010 to tell the Islamic Republic that we will not stay silent while one more woman is stoned to death in Iran.  We will later walk to DuPont Circle and raise awareness of Sakine’s situation in the community.

Please feel free to bring your own signs with messages protesting the barbaric and criminal stoning act that the Islamic Republic has planned for our sister, Sakine Mohammadi Ashtiani.

There will be an open mike so that anyone who wishes to speak may express themselves.

“He said his mother was an outspoken critic of the regime and especially Khomeini from day one. She was a teacher and had spoken against the regime and authorities at work. “One day when we were all having lunch, they stormed in and took my mother with them … it all happened so quickly. It didn’t even take two weeks when, one day, they announced in the town ‘come and witness a women being stoned.’ That woman was my mother. ”

He said that with fear and in a state of shock, he went and from a distance witnessed his mother being stoned to death … he believes though that his mother was still alive when buried. This man has sent me his indictment against the savage thuggery of this anti-human, fascist regime, to be introduced to an international court.”
— Rescue Sakine Mohammadi Ashtiani, Prosecute Leaders of the Islamic Republic! by Mina Ahadi

3 thoughts on “Washington DC: STOP the STONING of Sakine Mohammadi”