“No Food, No Water, Until to Get Result”: The Shame of UNHCR & The Email You Need to Send 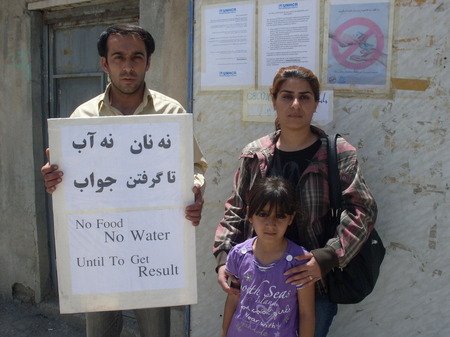 This is a report on the situation of Leyla Sultan-Panah and her family, who have been seeking asylum outside of Iran under the worst possible conditions for years. The report is by Samira Nassiri, a human rights activist and a student refugee from the city of Van.

Below the report is a sample letter provided by Nader Moavenian that you can use to send to the appropriate authorities to demand that this family finally be granted their right to asylum. A blog has been started that advocates for Leyla Panah and her family.

Leyla Sultan-Panah is a women’s rights activist and Eghbal Biniaz is a member of the Kurdistan Democratic Party. Refugees in the city of Van in Turkey along with their daughter Darya, the young couple has gone on dry hunger strike in front of the United Nations. Tonight is the second night they are spending in front of the UN’s closed doors.

It is 1:07 a.m on Wednesday, June 3rd, Turkey time. I live in the city of Van and was in front of the UN up until half an hour ago. Today I was informed of several of my friends’ hunger strike in front of UN. I was thinking to myself, it won’t last more than several hours. Around 10 p.m. a colleague of mine from the city of Kaysery contacted me and stated our Iranian friends are still in front of UN and haven’t ended their hunger strike. Their child is suffering from asthma and has to go home as soon as possible. I immediately got ready and after waiting for the taxi for an hour headed toward the UN. I saw several Iranians sitting on the ground holding out signs with the following statement written on it: No water, No food, Until we get an answer.

I went ahead, said hi and started talking to dear Leyla. Because I thought they had no place to stay, I asked her to end the hunger strike, grab her husband and child and come and stay with me at our rental home. She shook her head, thanked me and promised to send their child to a friends’ home to keep her safe from the winter cold.

I asked if she has had any interviews with TV stations since this morning. Asked her the result of hunger strike, she answered: “We have an interview with the chairman of UN at 9 a.m. sharp and are hoping to get good news.”

I asked her to eat something, but she refused. Her husband Eghbal said due to stomach problems he had to have some juice. Only some fruit juice!

I was embarrassed to have gone to them with a full stomach, while they haven’t even had a sip of water.

Eghbal Biniaz and his wife Leyla Sultan-Panah are a Kurdish couple who left the country by border traffickers in 2005, following the pressures forced upon them by Iranian security forces. They took refuge in Turkey. Unfortunately, after six months they had to file an appeal, and 22 months after the first appeal, their case was declared closed.

After this incident Eghbal Biniaz, fearing deportation, smuggled his wife and daughter to Syria, where they were arrested and sent to prison. Due to the terrible conditions in Syrian prison, Leyla’s toddler started suffering from asthma.

After a relatively long period of time and with the help of Refugee Rights Organizations and Commissioner for Refugees, their deportation to Iran was prevented and instead they were deported to Turkey.

30 months after Leyla and her daughter’s return to Turkey, their case has remained closed.

These problems, including the failure to finally grant asylum status, drove this young couple to start their hunger strike in front of UN and ask the chairman to deal with their case.

Tonight is the second night Leyla and Eghbal are spending behind UN’s closed doors.

Due to security reasons and problems they might be facing from Van police, they asked others and I to go home and leave them alone in front of the UN, under the soft lighted lamp.

Unfortunately, the word United Nations has become an official word, and no positive action is done by this organization.

The City of Van is a forgotten city. The first day I came to this town, I thought I was the only political refugee in Van. But gradually I discovered that many of my colleagues reside in this forgotten city and are living in worst condition. Although they have been accepted for years, they have not yet been able to leave Turkey.

By ignoring issues such as this and particularly issues formed in the City of Van, the United Nations has shown they have forgotten the true meaning of Humans Rights.

As these two words suggest: Investigation and giving a helping hand to those in need.

Leyla and Eghbal are also human and have rights.

What goes on in UN that Human Rights are gradually forgotten?!!

I am asking Refugees Rights Organizations, Human Rights and United Nations to help Iranian political refugees and do all in their power to improve the situation for these individuals.

Leyla Sultan-panah is a women’s rights activist and Eghbal Biniaz a member of the Kurdistan Democratic Party; a young couple, refugees in the city of Van in Turkey with their daughter Darya, have gone on hunger strike in front of United Nations. Tonight is the second night they are spending the night in front of UN’s closed doors.

Please ask UNCHR to take their case as well as cases of many other Iranian refugees, who are fleeing the persecution of IRI, seriously, and prevent more human catastrophes that may be caused by lack of proper attention to these victims of violations of Human Rights at the hands of the IRI.

« WPI Ensures Demands of Iranian Workers Are Heard at the Annual Meeting of the ILO
Global Unity for Iranian Workers: American Bus Drivers Stand Up for Ossanlou »

3 thoughts on ““No Food, No Water, Until to Get Result”: The Shame of UNHCR & The Email You Need to Send”