Event Reports, Not One More Execution

Event report: May 16, 2010: Protest against Executions and the Islamic Regime in Washington DC

Mission Free Iran attended a protest against the Islamic regime on Sunday May 16 to condemn the regime for 31 years of violence against people in Iran, most recently with the executions of May 9. Held in front of the Iran Interests Section of the Pakistani Embassy, the protest was called by local members of the Worker-communist Party of Iran.

The chants of the crowd were loud enough that the residents above the regime’s offices complained about the noise: “Down with the Islamic regime in Iran,” “Zendaniyeh siasi azad bayad gardad” (Political prisoners must be free), “Islamic regime, your time is up,” “Marg bar Jomhuriye Islamii,” and many others, including one about Farzad Kamangar. There were many political currents represented, from the Greens to the Monarchists to Worker-communists and independents; some Kurdish activists also attended today’s event. There were Iranians and non-Iranians in attendance.

We’ve come here today to condemn the Islamic regime for 31 years of repression, rape and other forms of torture, and execution. We’re here in solidarity with Kurdistan, and all of Iran, who have just lost 5 more beloved brothers and sisters to the bloodlust of this regime.

Kurdistan’s response to the regime’s slaughter on the 9th of May of Farzad Kamangar, Farhad Vakili, Shirin Alam Hooli, Ali Heidarian and Mehdi Eslamian was the first time in 30 years that people have resorted to a general strike as a response to the brutality of this regime.

This action underscores the fact that this revolution is not about religion, it’s not about ethnicity, it’s about a people – all of Iran – struggling against this regime. As many have anticipated since the early days of this uprising, the trend in peoples’ response to the violence of the regime shows clearly that this movement is not about black Islam vs green Islam, but is a much deeper movement with demands that some call radical, but I call simply human rights: women’s equality, workers’ rights, an end to executions and political imprisonment, security and dignity for our elderly and our children. FREEDOM.

The regime hears these demands, and knows that fulfillment of these demands means the end of 31 years of its bloody and illegitimate rule. And so, like the heron in the story of the little black fish*, it has tried to devour this movement whole. The regime, like the heron, is a slave to its instinct to kill, and though it should have known better, the regime chose to gamble on Kurdistan, to test the willingness of the people to resist, to endure pain. And like the heron upon consuming the little black fish, the regime has made its fatal error.

Because our beloved Farzad is perhaps more like that little black fish than anyone could have known. Though the heron has finally taken him into its belly, the small double-edged dagger he carried, with a blade of justice on one side and truth on the other, will be that heron’s undoing.

This regime, like the heron, is now cut and bleeding from the inside, and although we may never see our precious little black fish again, we watch the heron twisting, turning, crying out. The heron continues to beat its wings, but it will fall into the water, beat its wings once more, then lie still.

* The Little Black Fish is a children’s story that everyone can learn from, about a fish who wants to be free to explore its world, and on its journey to do so, encounters both allies and enemies along the way. The story was written in 1967 by dissident teacher Samad Behrangi.

One of Farzad Kamangar’s last letters made extensive reference to the story of the Little Black Fish. 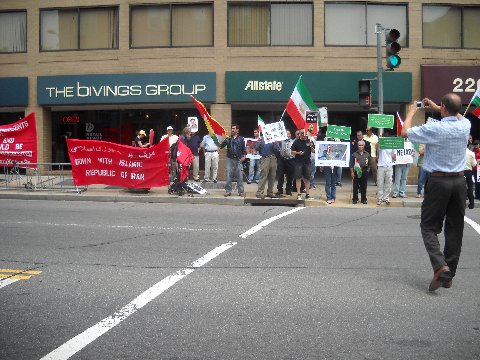 Photo courtesy of Saeed Salehinia. In these photos you can see that the crowd that came out to protest against the Islamic regime and its depraved violence was ideologically diverse.