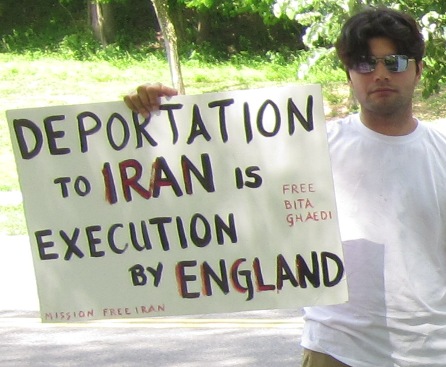 (Apologies to everyone for this late posting, especially to our good friends at LGBT Asylum News in the UK, who helped get the word out about this protest at the British Embassy in Washington DC, USA. The UK Border Agency kept us busy fighting their attempted deportation of Bita Ghaedi on May 5 (which was defeated), and their ruthless treatment of Nadia Arzane and Bashir Foris on May 6, when UKBA forcibly separated the pregnant Nadia from Bashir and deported him (note that it is illegal under international law to split families this way). Bita awaits a new hearing on her status in July, and is home with her Mohsen until then, while Nadia remains in very bad condition at Yarl’s Wood detention facility.)

On May 1st, Mission Free Iran coordinated a protest in front of the British Embassy at 3100 Massachusetts Avenue NW to tell the UK’s government that we say NO! to their illegal and inhumane policy to deport asylum-seekers to Iran.

We specifically demanded asylum and refugee status for four asylum-seekers who have been unfairly and illegally refused these things, and whose lives would be directly threatened if they were to be returned to the Islamic republic: Kiana Firouz, Bita Ghaedi, and Nadia Arzane & Bashir Foris.

Our group was present in front of the British Embassy from 2-4pm; conveniently, it was an Embassy Tour Day in Washington DC, so there were many tourists present and curious about the protest. We were able to discuss with several of them the UK’s inhumane and illegal policies in general, and specifically towards threatened Iranians seeking political asylum.

We developed specific chants for the protest as well, including the following:

Zendaniyeh siasi: political prisoners MUST BE FREE!
In Iran, England or Turkey!
WE WON’T LEAVE TIL THEY’RE ALL FREE!

Stop aiding dictators!
Blood is on your hands!

Justice for Immigrants!
Freedom for Refugees!

At the end of the day, the take home message that we sent to the UK was the following:
BRITISH GOVERNMENT: HANDS OFF IRANIAN REFUGEES!
ALL IRANIAN WOMEN HAVE RIGHT TO POLITICAL ASYLUM!
NO HUMAN IS ILLEGAL! 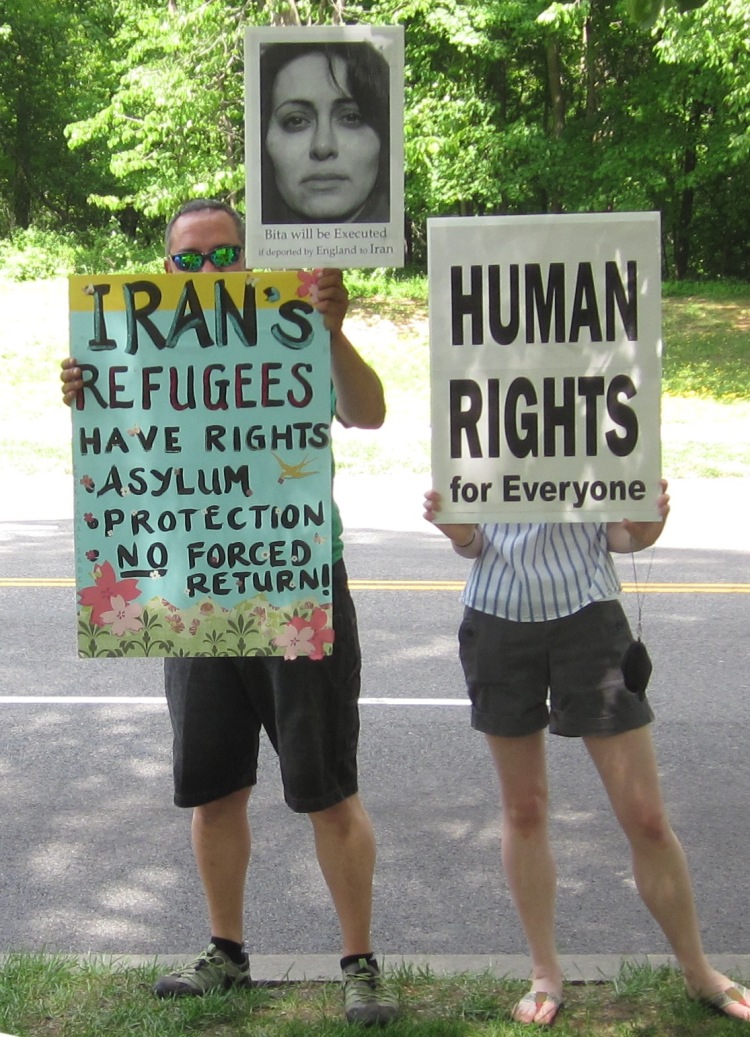 « Photos of Kurdistan Strike, May 13 2010. Photo set #2: Sanandaj.
Letter of Support for Protests of Families of the Executed, People of Kurdistan and All Those Who Resent These Executions »

One thought on “Event Report: May 1, 2010: Protest at British Embassy Against Inhumane Deportation Policies”